‘Hold my beer’: Carlsberg shows industry how to keep the taps flowing in China during Covid-19 pandemic

Collaboration with Chinese online delivery platforms has helped Carlsberg China reach more customers in the world’s biggest beer market , helping it buck the decline seen in the wider industry caused by consumers cutting down on eating and drinking out last year.

And while the worst of the impact of the Covid-19 pandemic has largely subsided, digitalisation will stick around as a key strategy at Carlsberg, said Lee Chee Kong, president of Carlsberg China.

“We see digitalisation as one of our strategic priorities. In the post Covid-19 era, we will increase our investment in diversifying our distribution channels, especially in e-commerce,” Lee said.

China has become the biggest market for Carlsberg, a Danish multinational company that is also the world’s third-largest brewer. The country consumed about 38 million kilolitres of beer in 2019 – the most globally – data from China Alcoholic Drinks Association shows, generating sales revenue of 158.1 billion yuan (S$32.8 billion). China also produced 37.7 million kilolitres that year, around a fifth of the world’s total production.

Consumption per capita in 2019 stood at 27.1 litres, behind the more than 60 litres per capita in countries such as the US, Mexico and Brazil, data from research firm GlobalData shows.

Carlsberg, which has been operating out of Huizhou, Guangdong province, for the past 26 years, is one of the only two foreign brands that have made it into China’s top five, GlobalData data shows.

By working closely with on-demand delivery platforms such as Meituan, Ele.me, which is backed by this newspaper’s owner, Alibaba Group Holding, and JD-Daojia under Dada Nexus, in which JD Group has a 46.5 per cent stake, the brewer was able to report 21 per cent growth in operating profit and 3 per cent growth in volume last year. The overall industry’s sales volume, however, declined during this period, especially during the first half of 2020. 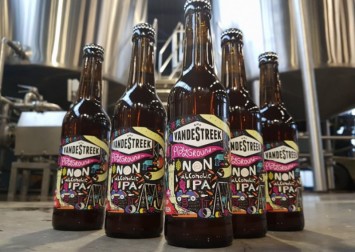 Huizhou, which is home to Carlsberg’s first brewery in China since 1995 , still serves as production base for southern China and Hong Kong. Carlsberg China has since 2004 expanded production into Western China. It discontinued its Hong Kong production, which it moved to Huizhou.

There is still much room to grow for Carlsberg in China. The country’s top three brands were all local brewers – China Resources Beer, which counts Dutch brewer Heineken as a shareholder, Tsingtao Brewery and Beijing Yanjing Brewery .

With 26 breweries in operation in provinces such as Xinjiang , Ningxia and Yunnan, among others, Carlsberg China also hopes to differentiate itself by using climate-friendly production processes.

Last year, all 26 breweries were powered by renewable electricity, which equalled a reduction of about 90,000 tonnes of carbon emissions, or 65,000 small sedans being off the road for a year, the company says on its China website.