One of Yayoi Kusama’s pumpkin sculptures, similar to the one a Hong Kong art dealer paid US$1.4 million for but never received, on display on the city’s Central harbourfront.

A Hong Kong art dealer said on Thursday he was pleased to have helped smash a multimillion-dollar racket, and to have been given justice by a London court, four years after he paid £1.1 million (S$2.1 million) for a Yayoi Kusama pumpkin sculpture that he never received.

Angela Gulbenkian, a German art adviser who married into a prominent family and is known for her lavish lifestyle, pleaded guilty on July 2 to the theft of the sum Mathieu Ticolat had paid to her London account for the large, bright-yellow sculpture in the shape of a pumpkin covered in the Japanese artist’s signature black dots.

Gulbenkian was arrested in Lisbon, Portugal, in June 2020 and extradited to the UK. She will be sentenced on July 28.

“I still don’t know whether I will get the money back,” said Ticolat, who has bought and sold modern and contemporary art for 20 years. “There are many fraudsters out there.

“This industry is not regulated. You don’t have to have a certificate to be an art dealer. Some of these professional scammers do get caught but the damage they inflict is tremendous.”

In an industry where deals are facilitated by personal connections with the elite, Gulbenkian’s supposed pedigree invited blind trust, even in the absence of a professional track record.

Ticolat had never dealt with Gulbenkian when he agreed to buy the work through her in 2017. She claimed to be representing a client who wanted to remain anonymous and asked Ticolat to pay her the money. He took confidence from the then 35-year-old’s marriage to a great-grand-nephew of Calouste Gulbenkian, the oil tycoon and art collector who was the world’s wealthiest man when he died in Lisbon in 1955.

Ticolat was also given the impression that Gulbenkian was connected to the respected arts and philanthropic charity in Lisbon bearing the family name (The Gulbenkian Foundation has denied any such links.)

In deals for art it is common for the identities of both buyer and seller to be hidden, and this lack of transparency has given rise to plenty of disputes and cases of fraud. Gulbenkian’s extradition from Lisbon last year was not the only dramatic arrest in the secretive and glamorous high-end art world.

In June 2020, the American gallerist Inigo Philbrick, who was engaged to be married to a UK reality-TV star, was tracked down in the Pacific Island of Vanuatu and flown to the United States to face charges related to the selling of artworks that didn’t belong to him, including a Kusama installation he allegedly sold to a member of the Saudi royal family in 2019.

In the Gulbenkian case, the pumpkin was not pilfered. In June 2018, Ticolat heard from a Singapore company called Artseen which said Gulbenkian was selling the sculpture on their behalf but had failed to hand over the money that Ticolet sent her. Artseen, which was either the owner of the pumpkin or simply another agent, terminated her contract and found a new buyer in November 2017. 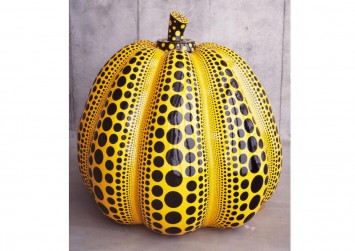 Ticolet said Gulbenkian came up with excuse after excuse for the shipment delay, citing restoration needs or saying the owner was having second thoughts about selling.

In court in London she also pleaded guilty to the theft of £50,000 that another client had given her for investment; another criminal case against her is pending in Germany.

Ticolat, who co-founded the art advisory Ticolat Tamura in Duddell Street, in Hong Kong’s Central district, said bank statements seized from Gulbenkian by police showed that after he sent her the money, she had sent a portion of it to her mother in Germany and spent extravagant amounts on private jet trips and luxury items.

“It is so easy to scam in this industry. Now I do more due diligence, and if I do not know the identity of the seller, I always insist on using an escrow service,” he said.