A Hong Kong woman has been jailed for 31 months for hurling a 6.8kg stanchion from the third floor of a shopping centre in an attempt to prevent police from making arrests at a protest against the national security law.

Advertising copywriter Yeung Ying-hei was also fined HK$1,000 (S$173) on Thursday for damaging the stanchion she stole from a cake store at Causeway Bay's Times Square which she threw from the third to second floor on July 1, 2020.

The protest took place on the anniversary of the city's handover to China and a day after the Beijing-imposed legislation took effect. Staging a demonstration during this significant moment, Chan said, was an attack on the government's authority.

The judge also slammed the defendant for refusing to plead for leniency after her conviction, saying her unyielding attitude was a show of defiance and indicated a lack of remorse.

"The defendant believes she can earn applause with her unwavering spirit. This is utterly flawed and wishful thinking," Chan said. 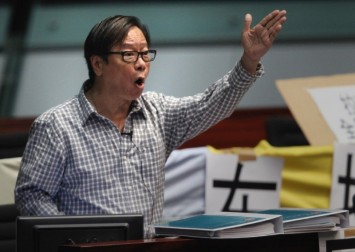 Police banned the annual July 1 rally in 2020 for the first time since Hong Kong's 1997 return to Chinese rule, citing the ongoing unrest following the anti-government protests from the previous year. Thousands of protesters defied the ban to express their discontent with the security law, which prohibits acts of secession, subversion, terrorism and collusion with foreign forces.

The court heard that riot police had entered the shopping centre's second floor after receiving reports of falling objects. Soon after, a stanchion from a retractable belt barrier was thrown from the building's third floor and almost hit a chief inspector and sergeant below.

Neither officers were injured in the incident, but the falling stanchion broke a digital signboard and cost the mall operator HK$4,700 to repair.

Chan jailed Yeung for 2½ years for attempted wounding with intent and dropping an object from a building, before adding an extra month to her overall sentence for theft.

He also ordered Yeung to pay compensation within three months of the ruling, although the cake shop stated it would not seek damages from the defendant.

In a separate case, a 26-year-old bank clerk has been jailed for 3½ years for rioting in a residential area in 2019.

Chung Ji-hin was convicted at the District Court last month after he was spotted carrying a brick during a protest in Hung Hom on Dec 1 of that year.

Demonstrators blocked roads and trashed shops on Tak Hong Street at around 8pm, including a Genki Sushi and Yoshinoya. Both were operated by catering giant Maxim's Group, a frequent target during the social unrest after its founder's daughter Annie Wu Suk-ching criticised protesters.

Judge Frankie Yiu Fun-che said both restaurants were heavily vandalised in the disturbance, which also seriously disrupted traffic, but accepted Chung did not assume a leading role and the protest did not result in serious injuries.