Hong Kong's consumer watchdog on Monday reprimanded four fitness centres for using aggressive sales tactics, even forcing some to borrow from moneylenders to pay the fees.

The worst example was one customer forking out almost HK$2 million (S$345,576) in four months, while others were accompanied to ATMs or banks to withdraw cash.

The Customs and Excise Department said that as of Sunday, 14 people had been arrested on suspicion of engaging in aggressive commercial practices. They included two directors and 12 members of sales staff at gyms in Mong Kok and Yau Ma Tei.

The four centres in question were SML Studio, Fitness Express Company and A Plus Fitness, all in Mong Kok, and Legend Fight and Fitness in Causeway Bay. 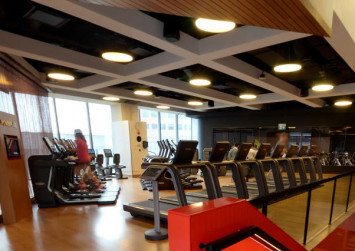 "[Sales staff] would listen in to the conversation [with the moneylenders], aiming to find out the limit a customer could borrow and the total amount of their assets, to create a personal package," Consumer Council CEO Gilly Wong Fung-han said.

Antonio Kwong Cho-shing, chairman of the council's trade practices and consumer complaints review committee, said the four centres were just the tip of the iceberg.

"The named centres represent only part of the problem in the industry," Kwong said. "Unscrupulous sales practices adopted by these fitness centres have shown the inadequacy of the existing Trade Descriptions Ordinance in protecting consumers."

A general approach would involve staff asking a complainant to fill out a questionnaire - often appealing for sympathy with claims it was their last of the day - before luring them to a nearby centre, Kwong said.

Once inside, the sales team would take over and coax the targets to hand over their credit and ID cards, with the intention of drawing up a contract and transferring funds.

Kwong said 90 per cent of the complainants were under 25 years old, some mentally disabled. The complaint cases involved around HK$40,000 (US$5,000) on average

The most extreme case involved A Plus Fitness, in which a 42-year-old complainant who suffered from white matter lesions, which affects the brain, was lured to the centre.

She was also persuaded to borrow about HK$600,000 from a moneylender after reaching her credit limit.

The council said 237 complaints were filed against the four fitness centres from January 2018 to February 28, 2019, of which 67 were referred to or directly reported to the Customs and Excise Department.

SML Studio, Fitness Express and Legend all opened for business in 2018 while A Plus Fitness started operating in 2017.

In the case of SML Studio and Fitness Express Company, all the complainants were under 25.

According to the council, SML Studio received 99 complaints, the most of the four centres, and refused the council's attempts at reconciliation.

Legend Fight and Fitness and A Plus Fitness both attended meetings with the council in March of this and last year.

Wong advised people to keep a closer eye on how young or mentally disabled family members spent their money.

"If they're on the streets and are urged to fill out questionnaires for the sake of kindness, please stop them," Wong said.