Lawyers for the government on Wednesday argued that Hong Kong's constitution allowed for not recognising same-sex marriages and civil unions, as the city's first court challenge to secure marriage equality reached its second day.

Barrister Stewart Wong Kai-ming SC, speaking for the Secretary for Justice, told the High Court that when the Basic Law, the city's mini-constitution, spoke of protecting the institution of marriage, it referred only to a union between one man and one woman.

He continued that the city government could not be said "to be discriminatory" when it refused to grant marriage rights and civil union partnership to same-sex couples.

Wong went further, saying that if the government granted same-sex couples the equal rights associated to heterosexual couples, it would in effect be undermining the Basic Law's interpretation of traditional marriage. 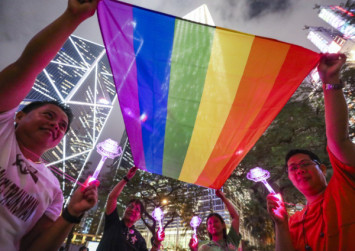 But Wong also prepared for the worst. He said if the court rules against the government in the case, it should at least give the administration the discretion to decide which rights to accord to same-sex couples.

The barrister was hitting back at MK, the anonymous lesbian who filed the case, whose lawyers told the court on Tuesday that the moment for change was "now or never".

MK launched the judicial review last year because she said the city's ban on same-sex marriage and civil partnerships violated her rights guaranteed under the Basic Law and Bills of Rights.

Hong Kong does not recognise same-sex marriage in general, although a recent court victory - part of a series of court challenges lodged by the LGBT community - forced the government to accept the practice for the purpose of spousal visas.

On Wednesday, Wong rejected MK's argument and said the Basic Law had always recognised only heterosexual marriage. The government, in his words, had "constitutional backing" for not allowing marriage equality.

Civil union partnerships carry the same legal rights as a marriage, but generally do not include the ceremony and exchanges of wedding vows.

That made marriage and civil unions effectively identical "in substance", Wong said, explaining why the government had objected to both for same-sex couples.

He countered the suggestion of MK's lawyers that the concept of heterosexual marriage was based on Christianity, saying the same form of marriage existed in many religions.

"It's the only form of marriage the world knew before 2001," he said, referring to the year same-sex marriage was first legalised in the Netherlands.

He said nearly 30 countries had now legalised same-sex marriage, but that most gained marriage equality through legislation rather than the courts.

He also said no social changes, either in Hong Kong or around the world, should influence the judge to update the interpretation of the Basic Law to make same-sex marriage possible.

The hearing continues before Chow on Thursday.