Hong Kong’s leader has said the city will chart its own way out of the coronavirus pandemic, emphasising there is no “one size fits all” strategy while seeking to play down comparisons with regional rival Singapore, where a fresh round of restriction-easing is set to begin next week.

As Chief Executive Carrie Lam Cheng Yuet Ngor was giving updates on the latest anti-epidemic efforts at her daily press conference on Thursday morning, Singaporean Prime Minister Lee Hsien Loong was announcing in a televised address that an outdoor mask mandate would be axed, most restrictions for travellers would be lifted and the city state was working towards a full resumption of air and land travel with neighbouring Malaysia.

Lee described the moves as a signal that Singapore was moving closer to living with Covid-19.

Hong Kong on Thursday recorded 13,074 new Covid-19 cases, including 7,342 people who logged their positive rapid test results through a governmental portal. Another 201 deaths related to the virus were reported by officials, including seven at public mortuaries. The city’s tally of confirmed cases stood at 1,101,224, with 6,770 deaths since the start of the pandemic.

Asked whether Hong Kong would follow Singapore’s lead, Lam said the question was “not very meaningful” and that her government would “adjust and do whatever is in the best interest” of the city.

“As I’ve also said on many occasions, the policies and measures to be adopted by each government in combating the Covid-19 epidemic will differ. I don’t think that there’s one size that fits all. I also don’t believe that there are only two pathways,” she said.

“That’s why I said that perhaps it’s not very meaningful to ask us to choose whether we’re going for route A or route B.”

As for whether Singapore had snatched the city’s “crown as Asia’s global hub”, Lam argued that Hong Kong remained an attractive world financial centre and aviation hub, as well as “a good place to live and work”.

She added that the authorities would preserve Hong Kong’s international connectivity and its crucial access to mainland China in a “pragmatic manner”.

“The best interest of Hong Kong is to do both, to maintain our connectivity with the rest of the world through the aviation side, and at the same time, also continue to perform the role of Hong Kong being the basis for businesses and individuals to access the mainland market,” she said.

“I remain very optimistic that once this wave subsides, we’ll pick up on the earlier discussions [on reopening the mainland border], and at the same time we’ll be able to open up to the rest of the world.”

Earlier this week, Lam announced a road map for easing the city’s strict anti-pandemic regulations after previously citing waning public tolerance. The plan involves lifting a flight ban on nine countries from April 1 and halving the mandatory hotel quarantine stay for incoming travellers from 14 days to seven if they return a series of negative test results. 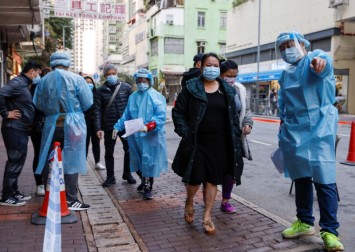 Social-distancing measures will be relaxed in phases over a period of three months starting from April 21, as long as there is no significant rebound in infections.

Under the first phase, some businesses and venues that were forced to close under the epidemic control rules, such as gyms, beauty parlours and places of worship, will be allowed to reopen, while restaurants will be able to offer dine-in service later and host more customers.

However, officials have repeatedly declined to say they are abandoning the mainland’s preferred “dynamic zero infection” approach in favour of living with the virus.

Government pandemic adviser Professor Yuen Kwok-yung said that every government would modify its pandemic-control strategy according to the global situation, and he believed the mainland would also change accordingly.

“We do not need to worry about the border opening with the mainland as long as we have done our best to reduce the number of cases,” Yuen said.

In a previous interview with the Post , top mainland epidemiologist Dr Liang Wannian, who is advising the local government, said the ultimate aim of the “dynamic-zero” infection strategy was to strike a precise balance between maintaining Hong Kong’s stability and economic status, while still controlling the virus.

Meanwhile, Lam on Thursday also pledged to step up the use of traditional Chinese medicine in the city’s anti-pandemic efforts, revealing that she had requested Beijing send a team of experts in the field to offer the city “good advice on how to prevent infections … and reduce severe cases” of Covid-19.

“They can also help in stabilising the condition of patients following recovery,” she added.

Lam had alluded to the increased role Chinese medicine was to play during a Legislative Council question and answer session on Wednesday. In addition to hinting at the impending arrival of the mainland practitioners, she noted that the city also soon hoped to distribute traditional medicine herbal soup packs developed by a local university.

Hospital Authority chief executive Dr Tony Ko Pat-sing said at Thursday’s briefing that Chinese medicine practitioners were already helping out at the makeshift treatment centre at AsiaWorld-Expo, and had been especially helpful in addressing symptoms of chronic illnesses commonly seen among the elderly patients there.

Citing experiences from Zhang Zhongde, a top traditional Chinese medicine expert from the mainland currently helping out in Hong Kong, Ko said the treatment was useful in alleviating some Covid-19 symptoms, such as a cough and dry throat, as well as other conditions like constipation, poor appetite and fatigue.

In general, he said, collaboration at AsiaWorld-Expo between medical teams from Hong Kong and the mainland had been smooth so far. The healthcare professionals seconded to the city by Beijing – around 400 of whom are currently working at the facility – had increased the number of patients they served by 44 per cent, going from about 250 to 360.

Lam, meanwhile, said that she had been told during a meeting on Wednesday with mainland experts currently in Hong Kong that there were still some weak points in the city’s pandemic control measures.

“Every day we still have around 200 deaths. The proportion of elderly patients in hospitals is still high, and the risk of having critical cases is also high,” she said, adding that the proportion who had received two vaccine doses was still too low and infections continued to crop up in care homes.

“Those experts asked us not to let down our guard.”

On the advice of mainland experts, Hong Kong has recently shifted its anti-pandemic focus to the “three reductions” and “one priority”. The strategy involves an emphasis on cutting down on infections, severe cases and deaths, while prioritising the treatment of elderly patients. 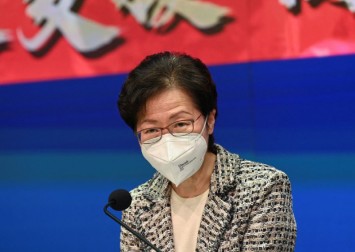 To that end, two oral antiviral drugs shown to reduce the likelihood of severe illness and death – molnupiravir from MSD and Paxlovid from Pfizer – are now being administered to Covid-19 patients in public hospitals, designated clinics and elderly care homes. Private hospitals that treat Covid-19 patients will also have access to the medications.

Ko said that as of Wednesday, more than 15,000 patients had been prescribed the two drugs.

The Social Welfare Department said it would provide outreach services for administering the German-made BioNTech vaccine at homes for the elderly in a bid to encourage more residents to take a shot. Since July last year, outreach service at care homes only offered the Chinse-made Sinovac vaccine and residents hoping for the alternative must go to community vaccination centres.

But Lam clarified that the government had no plans to extend the “vaccine pass” scheme, which restricts access to premises such restaurants, supermarkets and shopping malls, to public hospitals.

Yuen agreed that people should not be prevented from going to accident and emergency departments for treatment, but he said schools and public transport should be covered by the pass. He added it would take a few months to see the effectiveness of the pass in raising the vaccination rate because many people have been infected at this stage.