Hong Kong man admits in court to dousing ex-wife with drain cleaner, leaving burns over 28% of her body

A man has pleaded guilty before the High Court of dousing his wife in drain cleaner.

A Hong Kong man has admitted throwing drain cleaner at his ex-wife because she allegedly kept calling him old and useless.

The High Court on Wednesday heard that retiree Chow King-man, 71, attacked Cheung Shing-fa, 50, at her workplace on June 13 last year, repeatedly dousing her face and body with highly corrosive fluid even after she fled into a nearby shop and slipped on the floor half naked as her top had been damaged.

Chow reportedly told Cheung at the time: “You deserve this for what you have done.”

The woman suffered ocular damage and chemical burns over 28 per cent of her body, including her face, scalp, chest, back and limbs, which required multiple surgeries for debridement – the removal of dead tissue – and skin grafting.

A passer-by at the Tin Shui Wai shopping centre was also splashed in the incident when Chow bumped into him during the chase, leaving blisters on his left elbow and leg.

His defence counsel relayed his apology to Cheung, but reserved mitigation for the next hearing, pending reports on his background.

Acting senior public prosecutor Fergus Chau King-fung said the pair divorced in 2009, but continued to live together with their son in a Tin Shui Wai flat until around May 2019, when Cheung moved out to live with her boyfriend.

The court heard Chow first attacked Cheung on May 17, while she was waiting for a train at Hang Mei Tsuen Light Rail Transit Station platform, punching her in the head with both hands, five times in five seconds.

A 70-year-old woman sitting next to her also apparently fell victim, as Cheung heard her screaming. In the immediate aftermath of the attack, Chow revealed to Cheung that he had waited for her on purpose after their daughter scolded him the night before.

A police report was made at the time, and upon his arrest, Chow told investigators that he was upset and angry because he suspected Cheung had taught their daughter to be critical of him. 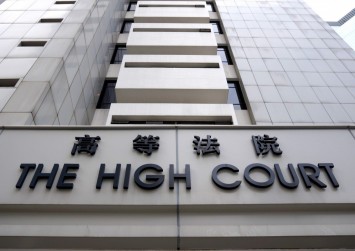 A month later, Chow went to Cheung’s hair salon at Kingswood Richly Plaza with a blue plastic bottle in his hand and threw fluid onto her face and body.

Cheung immediately felt a burning sensation and saw smoke emitting from her clothes.

She screamed and ran to another hair salon opposite hers, taking off her top as she approached a wash basin, but Chow gave chase and threw more fluid onto her body.

The prosecutor said Cheung tried to run away, but hit a salon chair and slipped on the floor, where Chow then pressed her down and poured the fluid onto her head, face and body.

Customers were asked to leave the shop, while the owner’s wife made a police report.

Under caution, Chow admitted throwing drain cleaner onto Cheung because she kept calling him old and useless.