A Hong Kong man has lost the ability to care for himself after Kwong Wah Hospital failed to tell him of a brain tumour discovered in a scan - a blunder which delayed his treatment by 19 months.

Lee Shu-leung, 54, cannot move around without a walking frame and help from his wife, after two operations left him with numbness on his left side. He also cannot close one eye, and has trouble chewing his food.

Once a sports fanatic, he is now a shadow of his former self.

"How difficult was it to give me a call and tell me I had a tumour? It was a very simple thing to do," Lee said. "The most important thing now is that I hope Kwong Wah Hospital can cure me."

In 2005, Lee, formerly a chef at various hotels, underwent surgery at the hospital in Yau Ma Tei to remove an initial brain tumour discovered that year. After the operation he lost hearing in his left ear but was otherwise healthy.

But on January 31, 2017, he collapsed while with friends at a restaurant. He was sent to Kwong Wah immediately. About 12 hours later Lee was discharged. Before he left, a doctor told him his brain was fine, he said. But he was also told to come back in six months for a check-up on his heart.

Fearing the half-year wait was too long, Lee went to a private clinic, which found nothing unusual about his heart. He therefore decided not to go back to Kwong Wah.

However, in September last year, Lee found himself feeling constantly dizzy. He then visited another clinic, which discovered a second tumour. The next day he sought help from Kwong Wah, where doctors confirmed the diagnosis.

Lee's wife, Eleanor Leung, 51, said: "I asked the Kwong Wah doctors, how come no one found the tumour when he was treated?

"They either kept their mouths shut or asked my husband why he did not come back for the heart check-up. They didn't even tell us how big the tumour was."

The following month Lee had his first round of brain surgery. After the procedure he was able to move around freely. But after a second operation about three weeks later, he suffered a number of ill-effects which persist to this day.

"No doctor told us before the surgery that this could happen," Leung said, holding back tears. Lee (right) cannot move around without a walking frame and help from his wife (left).  Photo: South China Morning Post

Lee has since had about 30 sessions of electrotherapy. The treatment aims to stimulate his nerves and muscles, but he has seen no improvement in his condition.

It was while undergoing this process that a doctor treating him at Princess Margaret Hospital in Kwai Chung let it slip that Kwong Wah had known about his second tumour after a scan back in February 2017, but never told him.

Lee's wife said: "I asked the Princess Margaret doctor whether my husband would have avoided his current condition if he had received proper treatment in time. The doctor told me to stop thinking about the past."

In a statement, a Kwong Wah spokesman admitted the hospital did not follow up on Lee's condition after he did not come back for the follow-up consultation. 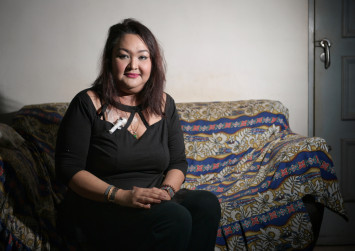 The hospital pledged to help the family and review and improve its mechanism for informing patients about their conditions.

The spokesman added that a special reminder would be placed inside the hospital's clinical management system to make staff aware of any radiology reports for a patient.

But he refuted the family's claims that they were not briefed on the risks and possible complications from brain surgery.

Leung demanded an apology from the hospital.

"Kwong Wah must shoulder the responsibility," she said. "It happened to my husband this time, it could happen to many others in future."

Lee nevertheless maintains a degree of optimism. "I will just have to be brave," he said.