An unemployed Hong Kong man snatched an officer's gun and shot him after his mother called in police following a heated row with her drunk son, a court heard on Thursday.

Chan Chun-kin, 31, was accused of firing three rounds in a Sha Tin flat on March 15 last year when three officers tried to handcuff him after his mother called for help.

Opening the case before a seven-member jury, prosecutor John Wright said at least one of the shots hit the young constable's right thigh and came out through his right calf, while another went through his right elbow. The two other officers sustained abrasions.

But Chan recounted a different version, instead accusing the three officers of suddenly attacking him while he was having breakfast that morning.

"You would have thought he was at a completely different place at a different time and he was utterly blameless," Wright said.

Both charges carry a maximum penalty of life imprisonment upon conviction.

The High Court heard that Chan fought with his mother while he was persuading her to sell their public housing flat to make money.

The mother made an emergency call for help at 5.27am and reported that a drunk person was causing a disturbance.

Wright said paramedics arrived first and heard the loud voice of a man scolding someone, but they did not enter as they were waiting for police, who went to the wrong block.

When the officers arrived at 5.50am, they found Chan reeking of alcohol as he swore and shouted at them while his mother wept on the sofa. 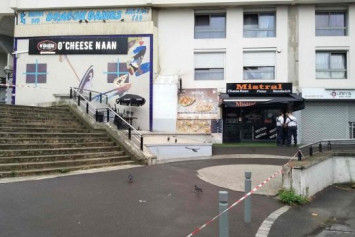 She was then escorted away to the lift lobby and a second team of three officers attended to Chan.

By then, Wright said Chan was very agitated, angry and abusive.

The prosecutor said Chan shouted a torrent of abuse towards the lift lobby, pushed the youngest officer - Constable Lam Wun-yan - and scratched him in the face, ignoring warnings to stop. The officers then tried to subdue him, though Chan struggled violently even after his right hand was handcuffed.

Wright said Chan then used his free left hand to pull out Lam's revolver, firing two shots before the weapon was removed from the holster, and a third after he managed to draw it completely out of the leather case.

Officers had to put handcuffs around Chan's ankles before he finally calmed down, the prosecutor said.

He sustained minor abrasions from the arrest.