Health authorities are trying to trace the many contacts of a job-seeking domestic helper earlier confirmed as infected with the coronavirus.

Health officials are scrambling to locate at-risk Hong Kong households after a job-seeking domestic helper confirmed as infected with the coronavirus shared accommodation within the last fortnight with 32 other foreign maids.

The track-and-trace operation was revealed on Wednesday as an 86-year-old resident of the Cornwall Elderly’s Home in Tuen Mun became Hong Kong’s latest Covid-19 fatality and the city marked its third straight day of fewer than 100 infections, with 85 new cases.

Concerned that more infections linked to the Indonesian maid case could follow, Chuang Shuk-kwan, from the Centre for Health Protection, said at a press conference: “We are a bit worried because we have not found the source [of infection] for this case yet.”

Eni Lestari, a spokeswoman for the Asian Migrants Coordinating Body, appealed to Hongkongers not to use this episode to discriminate against the city’s 400,000 helpers.

The new infections during Hong Kong’s third wave of Covid-19 have pushed the city’s confirmed tally to 3,754, with 43 deaths. An 81-year-old man who returned a preliminarily positive reading for the coronavirus also died in hospital. 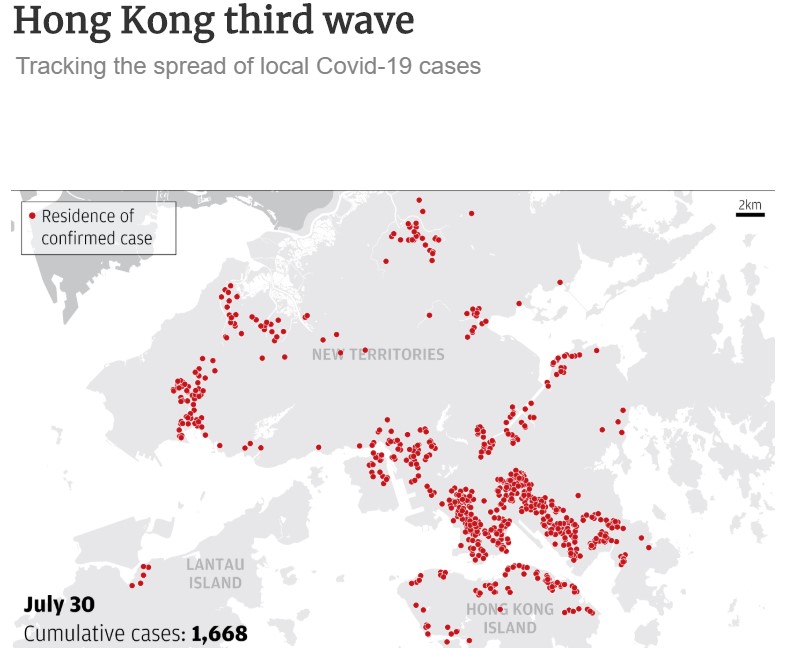 Of Wednesday’s case count, 82 were locally transmitted, and among those, 33 had so far not been traced. Three were imported cases.

The 37-year-old helper, who was confirmed as infected on Tuesday, left her contract with her employer on July 20 to look for a new job.

From July 22 to 23, she stayed at accommodation arranged by the KL Home Care agency at the Fook Gay Mansion in Wan Chai with 28 other helpers, who have all since left to work for new employers.

The health authorities were still trying to track down the migrant workers and their employers so they could be tested for Covid-19.

For the last two days of July, the Indonesian national was living in accommodation with four other maids at the Causeway Bay Commercial Building, as arranged by the Perfect Maid Centre agency. Health officers have already located all four of them. 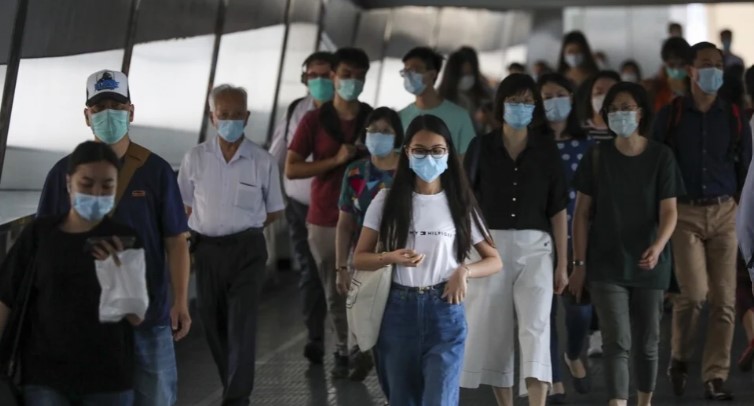 The whereabouts of the infected helper between July 24 and 29 remain unclear. Chuang said her team had not been able to get detailed answers from the maid due to language barriers, and that police were helping them.

Lestari also urged the government to provide accommodation for domestic workers who were between jobs during the pandemic, saying the flats offered by the agencies were always overcrowded.

She said normally each flat only had two rooms, equipped with bunk beds. In some instances there were three people to each bed while others slept on the floor. “They are overcrowded and sometimes lack proper hygiene,” she said.

Each worker usually had to pay HK$70 (S$12) per day in rent and many racked up large bills because the processing of new employment contracts and visas could take weeks, she added.

A manager of the Perfect Maid Centre denied the premises were a boarding house. Referring to the infected helper, the manager added: “We tried to persuade her to tell us where she had gone in the period of about 10 days before coming to us, but she would not tell. That’s a bit worrying.” 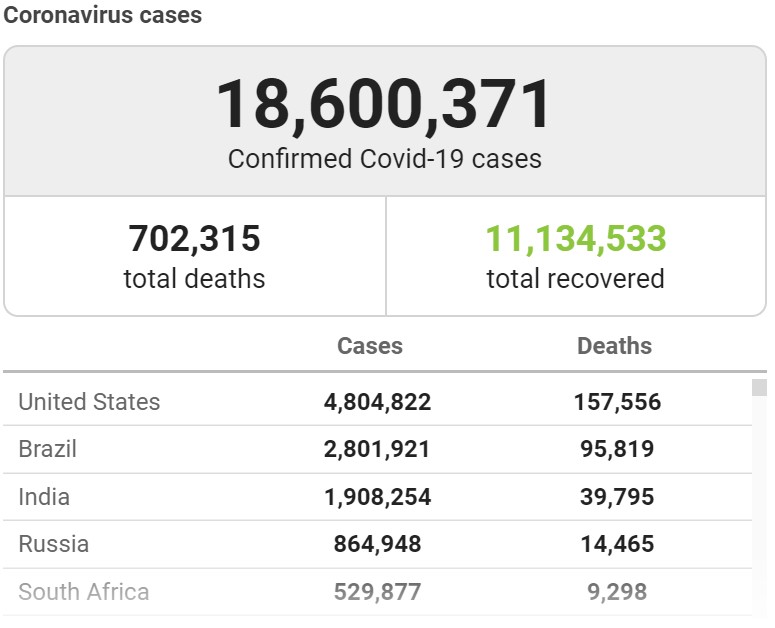 In June, the Hong Kong Union of Employment Agencies estimated that up to 10,000 foreign domestic workers were expected to arrive in the city this summer.

Concerns about imported infections have prompted the government to require travellers flying from countries deemed high-risk, such as Indonesia and the Philippines, to produce certificates showing they have tested negative for Covid-19 within 72 hours of their scheduled departure.

They also have to quarantine in hotels on arrival.

Among Wednesday’s new cases was a person with links to Hung Hom wet market.

A cluster forming at Star Global, an online retailer with outlets across the city, logged six more infections. A total of 52 people with links to the company have been infected.

Among the 70 or so other people who have preliminarily tested positive were two members of support staff at the Queen Elizabeth Hospital in Yau Ma Tei.

Meanwhile, Jiao Yahui, a senior official with mainland China’s National Health Commission, pledged on Wednesday that the central government would offer support to Hong Kong as the city requested, ranging from expert advice to resources, and including help with building a mobile cabin treatment facility and a temporary hospital.

A team of experts arrived in Hong Kong over the weekend to help the city fight Covid-19, with efforts focused on the building works.

But five lay members and assessors of the local Medical Council, including patients’ rights advocate Alex Lam Chi-yau, said on Wednesday that any doctors, nurses or medical laboratory technologists, should register according to existing procedures when visiting Hong Kong for work.

“This could ensure those people’s roles, work conducts and professional qualifications are regulated by the local system,” the five wrote in a joint statement issued in a personal capacity.

In response, a government spokesman said the technicians were invited to Hong Kong to support the anti-epidemic effort, adding they were exempt from mandatory quarantine because they needed to start working immediately upon arrival, and their duties fell under the banner of government operations.

On Wednesday morning, a team of experts from mainland China were continuing their visits to laboratories in Hong Kong, starting at the BGI laboratory in Tai Po, which they also toured the previous day.

Also on Wednesday, the Guangdong Provincial Government announced stricter requirements for those wishing to cross the border from Hong Kong.

From 10am on Friday, passengers entering the mainland province via the Shenzhen Bay and Hong Kong-Zhuhai-Macau Bridge control points must present proof they had secured a valid negative Covid-19 nucleic acid test result, as recognised by the Hong Kong government, within 24 hours of their arrival at the border.

Previously the certificate was allowed to be 72 hours old.

Responding to new clusters in Xinjiang and Liaoning, the Hong Kong government is introducing self-testing requirements from Thursday for those who have been to those mainland Chinese provinces within the past 14 days and seek entry to the city via the land boundary control points.

Separately, the Covid-19 testing arrangements for recent visitors to Hubei and Beijing have been cancelled, but non-exempted persons who were there still have to undergo compulsory quarantine for two weeks in Hong Kong.

Meanwhile, a study of more than 1,000 Hong Kong Covid-19 patients has found over one-fifth suffered from liver injury during the course of their treatment, facing up to 7.92 times the risk of admission to ICU, use of invasive mechanical ventilation, and even death. 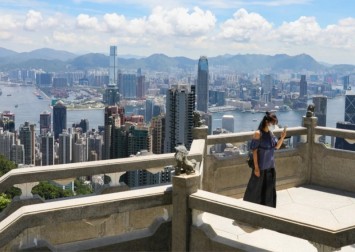 “We suggest monitoring the liver function of Covid-19 patients closely to enable early detection of any worsening of their conditions,” said Professor Grace Wong Lai-hung, one of the researchers from Chinese University.

Dr Terry Yip Cheuk-fung, another of the researchers, noted only about 4 per cent of the patients in the study had liver problems before they became infected.

“However, it is worth noting the study was based on the first wave of patients, who were mostly younger students returning from abroad and the average age of patients was 35,” he said.

Wong said age would likely increase the risk factor, and if they continued their study on the latest batch of patients, who were older, it was likely the number who suffered from liver damage would be higher.

As the Asia-Pacific had the highest proportion of patients with liver diseases in the world, the researchers worked with experts across the region to come up with 36 suggestions on how to manage patients with liver problems. Their paper has been published in The Lancet Gastroenterology and Hepatology.

Wong, the lead author of the paper, said the researchers suggested doctors treating Covid-19 patients should test liver function twice a week, while also paying attention to the type of treatment given to ensure it did not clash with other medication for conditions such as hepatitis B.