A lab assistant has been arrested for allegedly tampering with coronavirus test samples at the offices of the private lab BGI.

Police have arrested a laboratory assistant accused of tampering with specimens for Covid-19 tests at the Hong Kong offices of the private lab BGI.

The 24-year-old man, who joined the company last November, was captured by security cameras appearing to shake saliva test samples at the company’s Tai Po office on Feb 9 and 11, according to a police source.

The source said the surveillance cameras were set up recently, a move believed to be part of corrective measures taken by the firm after recent false positive results were found from its virus tests.

The man was arrested at his home in North Point around 10pm on Thursday (Feb 18), hours after police received a report from the private lab.

Without naming the lab, acting superintendent Sung Ching-wai of Tai Po Police Station said the man was arrested on suspicion of damaging specimens for Covid-19 tests.

“The suspect was accused of deliberately shaking utensils containing deep-throat saliva specimens in order to affect the test results in the laboratory on three occasions on Feb 9 and 11,” she said.

She said an investigation suggested the suspect had acted alone, and no other laboratory staff were involved.

Police, however, were still investigating all possibilities to establish the motive behind the alleged acts, she added.

“Police will take active and resolute enforcement action to deal with any illegal acts that affect public safety and public confidence,” Sung said.

As of midday on Friday (Feb 19), the suspect was still being held for questioning and had not been charged.

Detectives from the Tai Po district crime squad are handling the case.

After the arrest, the suspect remained tight-lipped, according to a source, who noted the alleged tampering had affected the accuracy of the test results.

The source said police were also investigating whether the man was linked to recent false positive results found among virus tests conducted by the company. 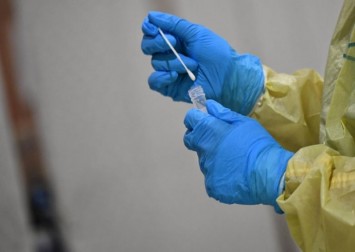 On Thursday, local health authorities apologised for 16 false positives resulting from tests conducted between Jan 29 and Feb 1 by BGI.

An investigation report submitted to the government by the Shenzhen-based company on Feb 11 cited human error, reagent residue and environmental contamination as possible causes.

“The government will continue to follow up on the corrective and improvement measures in the report, and will closely monitor the accuracy of testing services provided by the concerned private laboratory to ensure that similar incidents shall not occur again,” a spokesman for the Food and Health Bureau said on Thursday.