A handout photo. Police fined 219 diners for attending a banquet at a restaurant in Tai Po on Saturday evening.

Dozens of suspected triad members were among 219 diners fined a total of about HK$1.1 million (S$193,000) for breaching Hong Kong's social-distancing rules at a birthday banquet over the weekend, the Post has learned.

According to a force insider on Monday (May 16), anti-triad officers from Tai Po police station coordinated the operation hours after intelligence indicated that a dinner to celebrate the 70th birthday of an alleged Sun Yee On triad member was to be held at a restaurant on Ting Kok Road on Saturday evening.

About 50 officers, including members of the Police Tactical Unit, raided the venue at 8pm, soon after the dinner began.

The force said officers had discovered 219 people, consisting of 156 men and 63 women, aged between 19 and 75, in attendance at the banquet.

The source said the attendees included dozens of suspected Sun Yee On triad members, with four allegedly serving as office-bearers for the organisation.

The insider added that the other attendees were relatives and friends of the suspected triad members.

During the operation, fixed penalty tickets were issued to all of the diners for breaching social-distancing rules under the city's Covid-19 regulations on requirements and directions for catering businesses.

Under the current rules, the number of people at a banquet is limited to no more than 20. Diners who flout the coronavirus regulations are subject to a fine of HK$5,000 per person.

"It's probably a very expensive banquet for them," the source said, adding that the party was also cancelled.

The insider said all the attendees were allowed to leave one by one between 8pm and 11pm after officers took down their personal information and issued them with fixed penalty tickets.

Police also seized surveillance camera footage from the restaurant to gather evidence for an investigation. 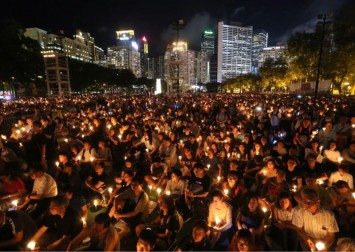 During the operation, police also arrested the manager of the restaurant for violating social-distancing requirements for catering businesses. The offence is punishable by up to six months in jail and a HK$50,000 fine.

The 60-year-old man was released on bail, pending further investigation. Detectives from the Tai Po anti-triad squad are investigating the case.

Police urged the public to follow all anti-epidemic restrictions to help combat the Covid-19 pandemic and reduce the risk of community infections, warning that the force and other government departments would continue to enforce the rules.

Since the requirements and directions for catering businesses and scheduled premises such as mahjong parlours and bathhouses took effect in 2020, officers from various departments have carried out 351,458 inspections across the city, leading to 108,207 verbal warnings, 1,475 fixed penalty tickets and 936 prosecutions as of May 11.