A senior police constable accused of mimicking the motions of a bicycle rider over the weekend has been suspended from driving duties.

A senior Hong Kong police constable accused of standing on his motorcycle’s foot pegs and mimicking the motions of a bicycle rider during a weekend patrol has been suspended from driving duties, according to the force.

A police insider said the officer involved was also under investigation for possible careless driving and the subject of an internal discipline inquiry.

In Hong Kong, careless driving carries a maximum penalty of six months in prison and a HK$5,000 (S$852) fine under the Road Traffic Ordinance.

The officer, attached to the traffic team in Tsuen Wan district, was patrolling on his motorcycle along Castle Peak Road in the New Territories area of Tsing Lung Tau on Sunday (May 30).

In a viral video, he can be seen standing on the motorcycle’s foot pegs as he approaches a group of bicyclists from behind, swaying his body from left to right and mimicking pumping bike pedals as he passes the riders.

Expressing concern over the incident, a police spokesman said: “The officer involved has been assigned to indoor work and suspended from all driving duties”.

The case follows two senior police officers recently being either placed on leave or suspended.

In a high-profile March incident, Senior Assistant Commissioner and Director of National Security Frederic Choi Chin Pang was discovered in an unlicensed massage parlour in Wan Chai during an anti-vice operation. 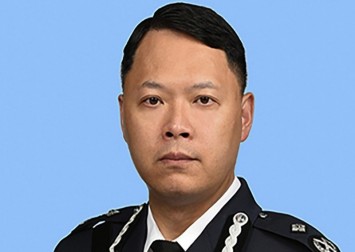 The force’s elite anti-triad team, tasked with investigating the case, has since cleared him of any illegal or immoral conduct, but officers are now seeking advice from the Department of Justice and looking into whether he breached any internal rules.

Choi has been placed on leave amid the investigation.

Superintendent Chan Hoi Kong, meanwhile, assistant commander of Sha Tin police district, was suspended from duty after being arrested on suspicion of trying to fraudulently obtain a mortgage from two banks.