A still image grabbed from the video taken on the night of the July 1 attack.

Hong Kong national security police are investigating whether a female journalist has any connection to the July 1 stabbing of an officer outside the Sogo department store in Causeway Bay, a source has said.

The journalist, who was working for online outlet Vision Times at the time of the attack, was picked up by officers from the force’s National Security Department late on Monday evening.

Pro-establishment figures have suggested the Falun Gong – a religious movement banned in mainland China – is behind the outlet, though ties have not been independently verified. A police source said investigations suggested the journalist was a Falun Gong member.

The source also said police found that the woman had begun filming before the assailant approached and attacked the constable, something that had drawn suspicion.

The woman was held for questioning at Chai Wan Police Station before being allowed to leave in the early hours of Tuesday.

“The woman was brought to a police station to assist our investigation into the stabbing incident,” the source said, confirming that her travel documents were seized, though no arrest had been made.

The Hong Kong Journalists Association (HKJA) on Tuesday morning said police arrived at a flat belonging to the woman’s friend in Tsuen Wan at about 11pm on Monday in the absence of a lawyer, then later conducted a search of her own Eastern district flat with a warrant.

The group said her electronic devices were also being held by police in addition to her travel documents.

The association said it sent a lawyer to help her in the early hours of Tuesday.

HKJA chairman Ronson Chan Ron-sing said the journalist’s mobile phone, computer and travel documents were being withheld by police, despite having been told she was only being invited to assist in the investigation.

He said the journalist had been fired in the wake of the live-streaming incident, with Vision Times citing “subpar performance” as the reason. The video was later pulled from social media. 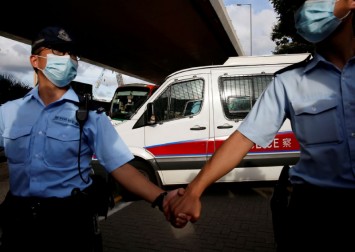 “If she was under investigation or being arrested, it would probably make more sense. But she was only assisting an investigation, on what grounds can police treat her this way?” Chan told a Tuesday morning radio show.

“She has already faced unfair treatment at work, and was cooperative with the police investigation. Yet she is facing even more trouble at the moment.”

In a response to the Post, the force confirmed its National Security Department had seized the journalist’s mobile phone, computer and travel documents as she was under investigation, despite not being arrested.

A police spokesman said the woman’s mobile phone and computer were confiscated under a warrant issued by a designated judge, while her travel documents were withheld according to Article 43(2) of the national security law.

The article states that authorities may take measures including ordering a person to surrender his or her travel documents.

The force added it was still “actively investigating the case”. The police source said the warrant allowed officers to seize news materials.

Hong Kong’s national security authorities have been conducting an investigation into the July 1 attack, in which a 50-year-old man described by officials as a “lone-wolf domestic terrorist” stabbed an officer on a busy street outside Sogo before killing himself.