A mob of men in white T-shirts attacked protesters and passengers in Yuen Long MTR station.

A man who took part in an “indiscriminate” attack on protesters and commuters at a Hong Kong railway station two years ago apologised to his victims on Tuesday.

Lam Koon Leung told a judge he had joined the rabble “out of impulse” in one of the worst outbreaks of violence during the social unrest in 2019.

The District Court heard mitigation from lawyers representing four of seven defendants who were convicted of rioting and wounding charges in relation to the overnight violence at Yuen Long MTR station between July 21 and 22.

Giving his preliminary views on sentence, Judge Eddie Yip Chor Man said the attack was so serious that the defendants’ past contributions to society, and the difficulties faced by their family members, could not constitute meaningful mitigation.

Their acts on the night in question were “some distance away from what was expected from an ordinary man”, the judge said, adding the defendants had failed to explain their motives.

“I am not saying [the defendants] are very bad, but everybody on that night appeared to have lost control for some unknown reason,” the judge said. “[The attack] really looked like an indiscriminate assault.”

The attack, in which a white-clad mob injured 45 protesters and commuters with rattan and wooden sticks, was something of a watershed moment in the anti-government protests that year, with police becoming the target of widespread public anger for their late arrival at the scene.

However, the force has defended its response, saying it was stretched thin battling a protest in the heart of the city. 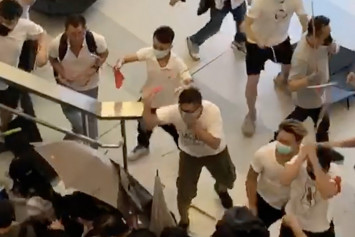 The four who appeared in the dock on Tuesday included cable worker Wong Ying Kit, driver Ng Wai Nam and electrician Choi Lap Ki, who were found guilty last month after a trial. Lam, a merchant, had pleaded guilty to rioting before the trial commenced in February.

His lawyer, Manalie Chan Wai Kwan, said her client was “deeply remorseful” and had reflected on his behaviour since he was detained in August 2019.

“He solemnly apologises in this court to his victims,” the lawyer added.

But Yip said he was considering imposing a high sentence on Lam, who was filmed beating strangers with a wooden rod at the station and inside a train on July 21, given that his victims were trapped and unarmed.

Choi had actively taken part in the violence by battering a man on a staircase and throwing objects at protesters, Yip noted.

The judge agreed that Wong and Ng played relatively minor roles in the attack, but reiterated the grave nature of the crime warranted severe punishments.