Hong Kong officials will reveal planned changes to social-distancing measures that will kick in after Lunar New Year.

Hong Kong’s health authorities are expected to announce on Wednesday how existing social-distancing measures will be relaxed after the Lunar New Year holiday, according to a government source, as the city faces fewer than 20 new Covid-19 infections.

But one health expert has warned changes to the current distancing regime should be approached carefully, due to the high risk of coronavirus infections rebounding.

The announcement will coincide with a meeting of the city’s advisory panel on Covid-19 vaccines, which will discuss new data provided by Coronavac manufacturer Sinovac.

Updates on the vaccine, which has been delayed by a late submission of clinical data, will be released by advisory panel chairman Professor Wallace Lau Chak Sing later in the day.

The authority previously requested Sinovac provide relevant clinical data after it had been published in medical journals, but has now accepted phase-three data submitted to the World Health Organization (WHO) due to time constraints cited by the manufacturer.

Under current social-distancing measures, restaurant dine-in services are banned after 6pm, public gatherings are limited to two persons, and a variety of venues such as gyms, beauty parlours, bars and clubs remain closed.

Chief Executive Carrie Lam Cheng Yuet Ngor on Tuesday said the fourth wave of infections had been stabilised, with the number of daily untraceable cases reduced to about seven over the past week.

But experts warned it was too early for Hong Kong to let down its guard.

“Even though we have seen an easing in the number of infections recently, it is still hovering at a relatively high level,” infectious diseases expert Dr Leung Chi Chiu said.

“The past week, we had 161 local infections. That is 50 times more when compared to late October before the fourth wave started, when we had just three.” 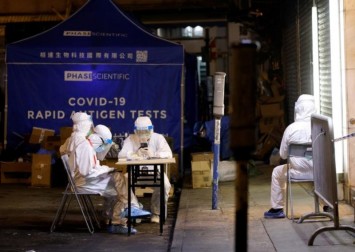 Leung said there was still a long way to go before Hong Kong could reach zero infections and urged residents to remain vigilant over Lunar New Year to avoid a rebound in cases.

On Tuesday, the city recorded 26 new infections, taking the tally to 10,693, with 188 related deaths. Two buildings in To Kwa Wan were also placed under lockdown and 1,700 residents tested, but no new infections were discovered.

Meanwhile, 25 residents at the Po Lee Building in Quarry Bay were each fined HK$5,000 (S$855) on Wednesday morning for not taking a virus test after the building was placed under a mandatory screening order on Monday.