Donald Tsang, former chief executive, and his wife Selina Tsang (right), at a reception in January.

There was anger and disbelief from lawmakers on Monday after it was revealed that Hong Kong taxpayers spend at least HK$1.4 million (S$241,628) each year for a team of helpers for former chief executive Donald Tsang Yam-kuen, and even paid while was in jail.

The matter came to light in a Legislative Council meeting when Acting Director of Administration Bobby Cheng Kam-wing said the expenditures of the Office of Former Chief Executives had increased from HK$5.59 million in 2014-15 to HK$9.11 million in 2017-18.

He said this was partly because in 2014-15, the office only served two former leaders, Tung Chee-hwa and Tsang, but in 2017-18, it also started serving Leung Chun-ying, whose tenure ended in June 2017.

Cheng said each former chief executive had been given a three-person support staff: a senior personal assistant, an assistant clerical officer, and a driver. The team's salaries cost the government between HK$1.4 million and HK$1.6 million each year, Cheng said. 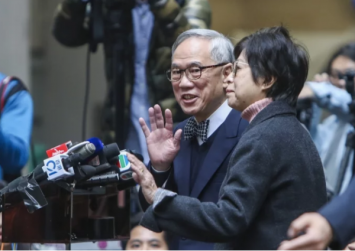 Tsang fell from grace in February 2017 when he was jailed for 20 months for misconduct in public officer. He spent about two months in jail before he was released on bail pending an appeal.

Tsang was back in jail last July, when the Court of Appeal rejected his appeal but cut his sentence to 12 months. He was freed in January after completing his jail term. Tsang will have his final appeal at the top court heard in May.

Lawmaker Au Nok-hin wanted to know if the money was spent for a staff when Tsang was in prison, wondering what work they would have had.

Cheng said: "All the former chief executive's teams continued to work in the office [regardless of the jail term], so the money still had to be paid."

Another lawmaker, Cheng Chung-tai, said that arrangement was unreasonable.

"Tsang was jailed because of a criminal offence, he should be deprived of the benefits of a former chief executive," he said. He added that he considered the money "wasted".

"The money was for promotion, but what could he promote? Promote himself as a former leader who broke the law?"

Bobby Cheng said the money was used in accordance with the government's policies.