Hui Tim-lik, 21, has been sentenced in the High Court to nearly eight years in prison.

A student has been jailed for nearly eight years for slashing a police officer's neck with a box cutter, in what a judge called "the most severe form of attack" against law enforcement during Hong Kong's anti-government protests in 2019.

Hui Tim-lik, 21, made his second appearance before the High Court on Monday (Jan 17), one week after he pleaded guilty to wounding with intent over his assault on Sergeant Wesley Leung Siu-cheung four months into the social unrest.

In imposing a jail term of seven years and nine months, Mr Justice Andrew Chan Hing-wai found the offence by the then Form Six student a premeditated one on a random officer. He also noted that Leung had been targeted in doxxing attacks and his children had been forced to change schools.

The judge noted that Hui had mounted the unprovoked attack on Leung, who was merely retreating from the scene of protest without confronting any participant.

"The defendant's act was the most severe form of attack on police officers," Chan said. "The victim only escaped death by a mere few millimetres' miss [of his vitals] and a few degree's twist [of the cut angle]."

The judge also found Hui had an intent to kill, and noted he had drafted his own will before committing the crime.

Hui has already served 27 months and will be eligible for release in 2025 at the earliest if the Correctional Services Department deems him to have behaved well during his incarceration.

He has just begun a bachelor's degree programme in psychology at Metropolitan University, formerly Open University.

The student admitted last week that he used the box cutter to wound Leung during a demonstration in Kwun Tong on Oct 13, 2019.

The sergeant was among 30 riot officers called to the APM shopping centre that afternoon following reports of vandalism on the premises.

When the group walked past the adjacent Kwun Tong MTR station at about 5.40pm, Hui suddenly charged forward and slashed the right side of the sergeant's neck.

The 2.5cm cut severed a vein and nerve in Leung's neck, with doctors anticipating permanent numbness in his vocal cord. A government pathologist concluded that the sergeant's life would have been in danger had the wound been a few millimetres deeper.

Prosecutors initially pushed for a charge of attempted murder, but ultimately accepted Hui's guilty plea on the lesser count of wounding with intent. Both charges are punishable by life imprisonment.

A victim impact assessment report said Leung still had vivid memories of the horror he experienced that day and had constantly worried about threats made to his friends, family and children after he became a target for doxxing. 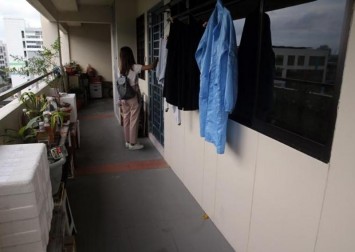 Chan noted that Leung's children had been forced to change schools because of the harassment, and urged police to "rigorously" hunt down the doxxers.

The judge compared the present case with that of Liu Guosheng, a 24-year-old cook from mainland China who was jailed for six years and four months in May last year for slashing and stabbing a Hong Kong student over political differences, six days after Hui's attack in 2019.

While Hui was less persistent and had inflicted relatively minor injuries on his victim, Chan said the vicious nature of the attack and the need to protect law enforcement officers called for a significant penalty.

As with Liu's case, the judge set a starting point of 10 years in prison, but gave Hui a smaller discount as he only pleaded guilty after the court set down a trial date.

Hui also became a doxxing target on social media after the 2019 incident. His personal particulars and that of his family were disclosed, and online calls were made to pressure his former school to further penalise him. There were also claims that Hui's information had been submitted to national security authorities in Beijing.

City leader Carrie Lam Cheng Yuet-ngor honoured Leung with the silver medal for bravery in 2020, with a government statement noting his "exceptional level of bravery and determination to perform his duties" while being "challenged and assaulted ferociously by rioters".