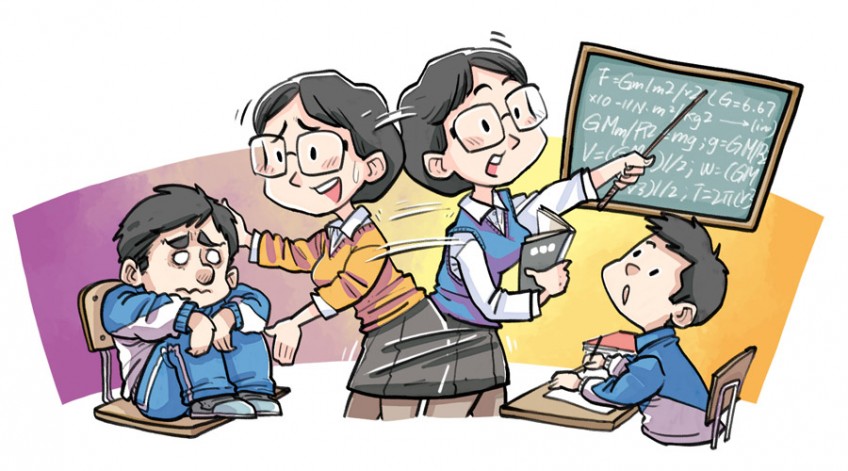 There are not enough school counselors to handle the problems typical among young people. Instead, the job falls to teachers, who lack the expertise to address the problem, as Nora Zheng reports.

For many teachers in Hong Kong, the job has become little more than drudgery.

However, that's not a result of the long hours required to prepare good lessons, or the time spent in class, the endless staff meetings or supervision of extracurricular activities - but because the extra effort required to deal with troubled children can be soul destroying.

According to educators, the responsibility for handling students experiencing emotional trauma falls mainly on the teachers, who have little training in the field and scant resources to back them up.

Schools just don't have enough resources to help children undergoing emotional turmoil; especially in a traumatized climate where students all too often see no other option than self-harm and even suicide.

For example, when Andrew (not his real name), a 13-year-old student, started crying in class, his teacher's reaction was, "Oh no, not again."

The teacher, Cindy (not her real name), had dealt with an episode with Andrew the day before. It had taken hours to calm the boy down, and afterward she assumed that things would be OK. She was wrong.

The boy was tormented. He'd started dating a girl in November 2016, and they were happy for a while, until the girl began avoiding Andrew and turning down invitations he made. Andrew tried to preserve the relationship, with no clue about what was really happening.

There were arguments in the hallways, and classmates would find Andrew weeping. The teachers read it as: "Andrew is in no mood for taking classroom notes."

Cindy, an English teacher with seven years' experience at a band three secondary school - the least prestigious academically - in Tin Shui Wai district, knew that Andrew was volatile and potentially a danger to himself.

She twice arranged for him to meet with a social worker, but was still perplexed about why her efforts to help were unsuccessful. "I almost doubted myself, and wondered whether it was worth talking with him for hours," Cindy said.

Successful handling of youthful trauma demands empathy and an understanding of the experiences young people are going through, according to experts. "Humans are a social species. We rely on connections to survive," said Justine Campbell, a counselor, coach and positive psychology practitioner.

"However, it takes time to build connections," said Campbell, who founded the Mindquest Group, a well-being centre in Hong Kong.

Building that connection means teachers have to spend time "babysitting" their students, in addition to undertaking their regular classroom duties.

In April last year, Cindy felt as though she was close to breaking point when Andrew was in meltdown. She was teaching 30 classes to students from three different grades every week, as well as supervising extracurricular activities, sports meets, cheerleader training and preparation for a Mandarin competition. In addition to those duties, she was in charge of rehearsals for a school performance that would be open to the public.

Her working days are full, with little time to spare. Every morning, she arrives at the school at about 7 am, prepares her classes, attends an obligatory meeting, and then leads her students in a daily reading session.

She teaches six classes a day, with the first starting at 8:25 am. The period between 12:55 pm and 1:50 pm is split - half lunchtime and half advisory period. When classes end at 4 pm, Cindy spends the next three hours providing extra tuition for students who are having trouble with their studies, or working with student organisations. From 8 pm to 10 pm, she tackles the work she hasn't had time to address earlier during the day.

Cindy always feels torn between discussions with her students and organising extracurricular activities. Her long and futile heart-to-heart with Andrew was continually interrupted by other matters; for instance, the rehearsals for the public performance. While Andrew was baring his soul, the students at the rehearsal were becoming impatient.

If all that weren't enough, the overworked teacher is also required to help promote the school.

Student enrollment has fallen at the school, as it has at almost every school in the city. An expected surge in student enrollment from the mainland has yet to materialize, and Hong Kong's ongoing low fertility rate has forced the government to close many schools as a result of a lack of students. Survival for many of the schools that remain means attracting more children and maintaining student numbers.

Cindy writes for the school brochure, rehearses the students' performance and organises exhibition kiosks for open days, hoping to create the best possible impression for students and their parents.

Elizabeth Quat Pui-fan, a lawmaker from the city's largest political party, the Democratic Alliance for the Betterment and Progress of Hong Kong, said smaller class sizes would help to relieve the pressure and allow teachers to spend more time with their students.

The city government began promoting the idea of fewer students in class in 2009. Studies supported the idea, predicting that it would benefit both students and teachers.

A study conducted in 2011 by Gary James Harfitt, associate dean of the Faculty of Education at the University of Hong Kong, found that lowering the teacher-to-student ratio would allow students more opportunities to take part in class discussions.

The relationship between students in schools with smaller class sizes was also shown to be better, and teachers experienced lower levels of stress.

However, some scholars have cautioned that lowering student numbers has not been tested in Hong Kong, so there is no guarantee that the situation would improve, while the cost of delivering education could rise.

Teachers cannot replace school mental health counselors, because they already have too many other responsibilities. More important, they don't have the training to be counselors.

If students have problems beyond the scope of social workers, they are referred to psychiatrists in public hospitals.

However, for regular students experiencing the normal strains of adolescence and whose cases are not classified as urgent, there is a waiting list of around 100 weeks or longer for consultation, according to the Hospital Authority of Hong Kong.

Effectively this means there is no support for students experiencing the onset of mental health problems, especially if they don't appear to be affecting people around them.

For example, when Cindy and the resident social worker had done all they could to calm Andrew down, all they could do was to leave him on his own - and follow the social worker's suggestion to move him away from the windows. Eventually, he took time out to deal with his emotional problems.

Educational psychologists are not responsible for dealing with students' emotional problems, anyway. Their primary job is to assess students who may be in need of special educational services, such as those with autism, learning disabilities and communication disorders.

"If we got more counselors in residence, and if they could help us with students' emotional problems, we would feel more confident about handling the challenges," Cindy said.

A survey conducted by the Hong Kong Federation of Youth Groups found that nearly 44 per cent of teachers said they didn't have the expertise or techniques to deal with students' emotional outbursts.

"The results reflect the point that teachers need to be equipped with knowledge of psychology to identify and manage students' emotional problems," Quat said.

Only one psychology course is included in the undergraduate programme for teacher training at the Education University of Hong Kong.

However, a former student at the university who is now a teacher at a primary school, said the psychology course contained several academic theories which proved worthless for handing tough kids. In reality, there is no recourse but to turn to more experienced teachers.

Last year, the Education University opened a professional mental health development programme, including a three-day primary course and a five-day professional training course. However, because it only runs on weekdays few teachers can attend.

"I really want to take these courses, but the time is just not appropriate," Cindy said. At least one of Cindy's problems has been resolved. Andrew overcame his emotional problems and returned to school in September.

Now the object is to ensure that all the students, many of whom spend eight hours a day at school, are as fortunate.