Hong Kong police have vowed to pursue anti-government protesters for the 15-hour siege of their headquarters as demonstrators retreated to map out their next steps to keep public opinion on their side after a tense week in the city.

The only public gathering on Saturday was a small pro-police rally of 300 people in Central. The officers' biggest defender in the aftermath of the unprecedented blockade that ruined the facade of the building and dealt a blow to police morale was their former chief, Andy Tsang Wai-hung.

Tsang maintained that police actions against protesters - using tear gas and rubber bullets during the clashes on June 12 - were "necessary and restrained".

He described the pitched battles as more severe than those during the Occupy demonstrations of 2014, when he was police commissioner. He dismissed any need for the police to apologise to the public.

The first government official to appear in public after the stand-off was Secretary for Justice Teresa Cheng Yeuk-wah. She attended the senior counsel appointment ceremony but refrained from commenting on the mayhem. She reiterated her apology for the government's mishandling of the bill, which was meant to allow the transfer of fugitives between Hong Kong and places it lacked such an arrangement with, including the mainland, the singular focus of opposition.

Cheng rejected protesters' demands not to charge their comrades arrested during the violence of June 12 and not to call the clashes a riot. "When the Department of Justice presses charges, it is based on the law, relevant facts and our prosecution rules," Cheng said.

In a similar vein, Tsang issued a "friendly warning" against those who asked for charges to be dropped.

"Prosecution should be a legal instead of political decision, otherwise the rule of law will collapse," he told reporters on the sidelines of a public event.

Tsang, who led the force during the height of Occupy, was asked about the arsenal of tear gas, rubber bullets and beanbag rounds deployed on June 12. "If the police found tear gas insufficient to stop the violent attacks, they had to deploy a higher level of force," Tsang said. "I think this time they were both necessary and lawful."

During Occupy, tear gas was used but police did not shoot protesters with rubber bullets. Tsang defended the police for "passively enforcing the law".

The hawkish Tsang, who is Beijing's nominee to lead the United Nations' drugs and crime division, said senior officials should not be forced to make apologies when none were necessary.

"I don't want making apologies to become endemic," he said.

In contrast to his high-profile statements, Chief Executive Carrie Lam Cheng Yuet-ngor stayed out of the public eye for the fourth consecutive day. Sources told the Post that, as of Saturday, she was not expected to have any public engagements until July 1.

A spokesman from Lam's office said she held a brainstorming session with all ministers at Government House to discuss how the administration could meet the aspirations of Hongkongers and improve its response to public opinion.

On talk of impending resignations by ministers, sources told the Post no such plan was on the cards.

The Post understands that top echelons of government have no intention of making further concessions to protesters over the divisive extradition bill that sparked historic protests fuelled by anti-government sentiments and accusations of abuse of power by the police.

While police officer volunteers spent the better part of Saturday cleaning up their headquarters that had been defaced by expletive-riddled graffiti and pelted with eggs, demonstrators were nowhere in sight, save for the odd few milling about near Harcourt Road in the afternoon.

Their retreat was in stark contrast to the 15-hour spectacle at police headquarters, as roaming protesters moved from government buildings to finally trap the force's officers - including police commissioner Stephen Lo Wai-chung - inside and then threw projectiles like eggs at the building. Officers had oil splashed on them and laser beams flashed in their eyes as protesters chanted against the police.

Late into the night, several pan-democratic lawmakers made an appearance to appeal for calm, warning protesters that storming the headquarters could land them in prison.

The protesters gradually dispersed at 2.40am. During the siege, police said 60 '999' calls to the Wan Chai division could not be handled.

In a statement at 5am, the force said: "Police have shown the greatest tolerance to the protesters who assembled outside [the headquarters], but their means of expressing views have become illegal, irrational and unreasonable."

The statement continued: "Police will stringently follow up on these illegal activities."

Protesters are fighting for four demands: for the bill to be withdrawn; for previously arrested protesters to be exonerated; the retraction of all references to the protest on June 12 as a "riot"; and for police officers who used excessive force that day to be punished.

On Saturday, eight Telegram groups that had been actively coordinating the apparently leaderless movement issued a joint statement, promising to reduce disruption for the general public and not to dissipate participants' energy.

Bonnie Leung Wing-man, deputy convenor of the Civil Human Rights Front which organised the two Sunday marches that attracted hundreds of thousands of protesters, said the group did no want the protest against the bill to go forever. 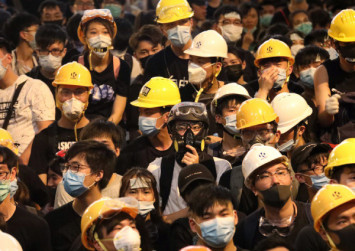 "But we have to prepare for a long fight as the government is dragging on," Leung said. "If we have to fight for a long time, we hope to make more people understand the impacts of the bill and win more supporters."

Executive councillor Regina Ip Lau Suk-yee and Chinese University political scientist Ivan Choy Chi-keung believed that the government and the police were trying to avoid being accused of stoking up the protests.

"Officials are playing it very safe because they are worried that whatever they say would be twisted," Ip said. "The police also came under lots of attacks, so they are keeping their heads low."

"The protesters had taken moral high ground as the government and police repeatedly made mistakes, so now officials are on the defensive and waiting for protesters, who are leaderless, to make mistakes," Choy said.

Jackey Li, 24, an office clerk, who stayed overnight outside Legco but did not participate in the siege last night, said the key to maintaining public support was to stress peaceful means of protesting.

"Even when protesters blocked roads, they negotiated with the drivers so as to keep their support," he said.

Sam, 34, who joined the police headquarters siege said: "If the government responds to our demands, we will leave immediately. We are smarter this time because we learned our lesson from Occupy about the importance of public support. The government is using the tactic they always use, delaying to try to undermine the public support we have."

At the pro-police rally, organiser Leticia Lee See-yin defended the extradition bill as "legitimate and righteous" and demanded that insulting police officers be made an offence as soon as possible. 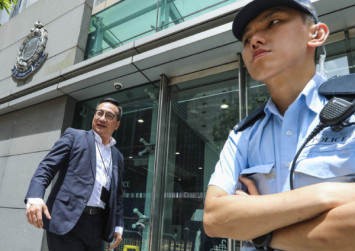 "The protesters should stop insulting our police officers who were just doing their job and defending our homeland," said Lee.

In an open letter to Lam on Saturday, former chief secretary Anson Chan Fang On-sang called for the establishment of a commission of inquiry to look into police's use of force. She also urged a one-off amnesty to all involved in the June 12 clashes.

On the week ahead, Li Xiaobing, an associate professor of the law school at Nankai University in Tianjin, believed Beijing would like to keep Hong Kong stable before the G20 meeting.

"Beijing's reaction would be basically restrained. There are no needs for Beijing to step in as long as the situation is under control," Li said. "So, the police may act under restraint hoping the disturbance would be quelled."