Hong Kong woman, 77, arrested over kitten stolen to 'scare away rats' in flat

The woman is taken into custody on Thursday afternoon.

Hong Kong police arrested a 77-year-old woman on Thursday and recovered a kitten which was allegedly stolen from a shop at the Yau Ma Tei wholesale fruit market nine days ago.

The woman was taken into custody from her home in Prosperous Garden on Public Square Street at around 4pm. Her flat is about 300 metres from the fruit market, where a kitten was stolen from a shop at lunchtime on Tuesday last week.

Inside the flat, the two-month-old kitten was found in a 30cm by 30cm crate, a relatively small space for the animal, according to Chief Inspector Yeung San-pong of the Yau Tsim criminal investigation unit.

Two parrots were also found in cages on the premises.

“An initial examination by officers from the Society for the Prevention of Cruelty to Animals [SPCA] shows the kitten is healthy,” he said.

But Yeung said hygiene in the flat was “very poor” and the floor was littered with leftover food, sundries and several cages for catching rats.

“Judging from the hygiene conditions, we do not rule out the possibility there are rats in the unit,” the chief inspector said. “We believe one of the reasons behind the theft of the cat was to scare away rats.”

He said the kitten and parrots were sent to the SPCA clinic in Wan Chai, where a vet would carry out further tests.

Officers arrested the woman, who lives with her son, on suspicion of burglary and cruelty to animals. In Hong Kong, animal cruelty to animals carries a maximum penalty of three years in jail and a HK$200,000 (S$35,000) fine.

Chan said the arrest was made after officers pored over a large quantity of security camera footage. 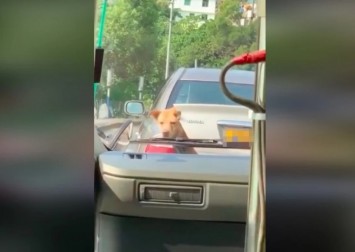 As of Thursday evening, the woman was still being held for questioning and had not been charged. Detectives from the Yau Tsim criminal investigation unit were handling the case.

An SPCA spokeswoman said a vet would inspect the kitten and submit a report to police for investigation of the case.

“After that, the cat will be returned to the owner as soon as possible,” she said, adding that the two parrots would be passed to the Agriculture, Fisheries and Conservation Department.