The floating restaurant heads off on its ill-fated journey.

The fate of Hong Kong's iconic Jumbo Floating Restaurant has taken a dramatic twist with its owner insisting the vessel did not sink 1,000 metres under the South China Sea, having only capsized - although a company spokeswoman could not say if it was still above water or deep beneath the waves.

The spokeswoman's comments came four days after owner Aberdeen Restaurant Enterprises first revealed an accident had occurred as the vessel was being towed to Cambodia. Earlier on Thursday night (June 23), the Marine Department told the Post the company might have breached local regulations if it had failed to notify the authorities of a sinking incident within 24 hours.

The spokeswoman said the vessel had not "sunk", having "capsized" all along. "It is inaccurate to say that the vessel has sunk," she said.

However, when asked why the vessel could not be described as having sunk as the company had stated that salvage works would be "extremely difficult" because the water depth at the scene was 1,000 metres, she could not provide an answer.

Asked whether it was natural and logical to take the ship as being 1,000 metres below the sea based on the information provided by the company, the spokeswoman said she had nothing to add.

She also could not give the vessel's exact location or whether it was above the water or deep under the sea.

Her clarification came four days after the company on Monday revealed the incident, which happened on June 19. The capsizing of the famed tourist attraction sent shockwaves across the globe, with media outlets around the world describing the vessel as having sunk. Locally, there were widespread concerns about whether Jumbo could be salvaged or would be left under the deep sea forever.

The vessel, built in the form of an imperial palace, encountered "adverse conditions" and "water soon entered before it began to tip", the owner said in its Monday statement.

"Despite the efforts of the towing company responsible for the trip to rescue the vessel, unfortunately, it capsized on Sunday," it said.

"No crew members were injured in the incident. As the water depth at the scene is over 1,000 metres [3,300 feet], making it extremely difficult to carry out salvage works".

The statement went on to say the company, a subsidiary of listed gaming firm Melco International Development, was "very saddened" by the incident and was seeking further information from the towing firm. Melco's chairman and CEO is Lawrence Ho Yau-lung, the 46-year-old son of late Macau tycoon Stanley Ho Hung-sun, who opened the Cantonese and seafood restaurant back in 1976.

An hour before the spokeswoman's remarks, Hong Kong marine authorities confirmed they had received a written report on the capsizing.

In a late-night statement, the Marine Department said Jumbo and Jaewon 9, an oceangoing tugboat that had been towing the restaurant from Hong Kong to Cambodia, remained in the vicinity of the Xisha Islands, or Paracel Islands, where the capsizing occurred.

In a separate statement addressing Post inquiries, the department hinted that the owner might have breached a local regulation.

It said that if any local vessel sank or became stranded or disabled within Hong Kong waters or elsewhere, the owner, agent or captain had to write to the director of the marine within 24 hours with the details. Those who fail to provide a reasonable excuse for not doing so are committing an offence and liable to a HK$10,000 (S$1,770) fine.

The 46-year-old vessel departed Hong Kong on Tuesday last week with the owner saying it could no longer afford to maintain it in the city. The restaurant had suspended operations in 2020 as it suffered an accumulated loss of HK$100 million due to the Covid-19 pandemic and social unrest in 2019.

The department said Jumbo's owner had failed to notify it before the media reported the sinking. After learning of the incident, the department said, it demanded a written report from the owner, which its agent submitted on Thursday.

According to the department, the agent's report said Jumbo was being towed by Jaewon 9 and had capsized due to adverse weather. It also said the shipowner would continue to follow up on the incident. 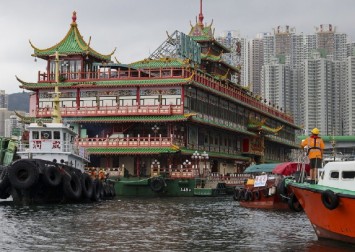 The spokeswoman for Aberdeen Restaurant Enterprises on Thursday night said it had submitted a report to the department and would fully co-operate with its follow-up work.

The department earlier revealed it had given approval for the vessel to be moved to Cambodia.

According to the tracking website Vessel Finder, Jaewon 9 was supposed to arrive in Cambodia on June 27 and had been zigzagging near the Paracels.

Professor Stephen Li Yiu-kwong, of Polytechnic University's department of logistics and maritime studies, said such movements, in general, might not be considered abnormal because a tugboat could "manoeuvre around the vessel to cater to its needs".

Li also said it was normal to pass the Paracels, with the captain determining which route best suited the conditions after assessing factors such as waves.

The company announced in late May that the restaurant would move away from Hong Kong for repairs and storage due to a lack of funds for maintenance, adding that it would wait for a new operator to take over.

It said millions had been spent annually on inspections, repairs and maintenance, calling it a "heavy financial burden" under the current economic environment.

In its heyday, the floating restaurant attracted celebrities from near and far, including Britain's Queen Elizabeth and film stars such as Tom Cruise and Chow Yun-fat.