"In the past 21 months, we have never banned residents from going to work when other places have imposed citywide lockdowns," she said at her weekly media briefing.

"We have been reviewing our policies regularly, such as allowing marathons and concerts to go on with a smaller number of participants," Lam continued.

"Today, the Food and Health Bureau will also announce some relaxations for gyms and fitness centres so residents can enjoy more social activities and continue to support our measures to guard against imported cases."

But those measures, particularly a 21-day quarantine for returnees from most countries, are precisely what have led to growing distress among some local residents.

Last week, Tara Joseph, president of the American Chamber of Commerce in Hong Kong, said the city government was not listening to the business community's concerns about its "zero-Covid" strategy, arguing it could undermine its future as a global financial hub.

"We're at the point where it just feels like we're talking to a wall," she said. "Hong Kong as a gateway between East and West looks belittled. One has to ask whether it's on the radar at all any more."

Asked on Tuesday to comment on Joseph's comments, Lam said she had explained to local business chambers that Hong Kong needed a strict zero-infection policy to reopen its border with mainland China.

"No one disagreed with me on the strategy, they know that reopening the border is also important," she said.

"We hope that a second meeting can be held as soon as possible," she added. 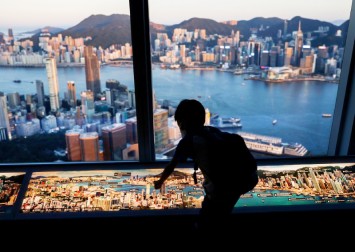 The chief executive stressed that it was necessary for Hong Kong to maintain its strict quarantine rules, noting that health authorities had identified seven imported cases on Monday from among people in quarantine.

"If we did not have quarantine, those cases would have entered the community and interacted with many people. Earlier, because of one case at the airport, we had to send 400 people to the Penny's Bay quarantine facilities, including 100 close contacts," she said.

"If we have five to six such cases each day, meeting 400 contacts, the community infection and pressure on our hospitals would be unbearable.

"Hong Kong's status as an international financial hub has been established for decades, it won't be affected because of public health or border reopenings."

Some health experts, however, have suggested the 21-day length of the quarantine period is not medically justified and could in fact contribute to infections being transmitted between hotel guests during the isolation period.