Hong Kong's wild boars on the loose: Cull them or protect them?

Hong Kong authorities are considering putting down wild boars that stray into built-up areas, but animal advocacy groups are pushing back against the idea and want more resources put into alternative control methods.

Dr Leung Siu-fai, director of the Agriculture, Fisheries and Conservation Department (AFCD), told the Legislative Council this week that current control measures could not keep up with the surge in boar sightings in urban areas.

"For wild boars that appear frequently and are used to being fed by people or pay constant visits to city areas, we should remove them, not just move them," he said, meaning they should be killed.

Leung said his department had tried everything from sterilising the animals to moving them to the countryside and educating Hongkongers not to feed them, all to no avail.

"People are simply too caring for wild boars," he said. "No matter how we enforce the law, we cannot stop people from feeding them. So we have to be heavy-handed in future."

Two years ago, he suggested euthanising more aggressive boars. This week, he said relevant groups would be consulted before the latest proposal to cull the boar population was carried out.

Hong Kong has about 3,000 wild boars, according to official figures, and they are not considered a protected species

Last month, local pop star Coco Lee's mother fell after she was attacked by a boar while on a walk near her home on The Peak. Frances Wang, 83, needed five hours of surgery for a shattered elbow and fractured hip.

A spokesman for the AFCD said the appearance of large groups of boars looking for food from residents and the way the animals had become used to wandering in busy urban or public areas posed a safety risk to members of the public.

"There is a strong need to step up efforts and switch to more effective measures to handle the proliferation of wild pig nuisance [incidents], including the humane dispatch of the pigs," he added.

Boars are currently put down humanely only if they are seriously injured or have attacked residents.

The Hong Kong Wild Boar Concern Group has objected to the latest proposal, with committee member Roni Wong Ho-yin saying Hongkongers should learn to coexist with the animals.

"We should find ways to deal with them, not sacrifice their lives," he said.

The authorities used to allow a group of volunteers to carry out hunting operations when there were reports of damage or attacks caused by wild boars, but that practice was suspended in 2017.

Wong urged authorities to put more resources and manpower into the boar sterilisation programme and try harder to teach people not to feed them.

He referred to a video circulated widely two weeks ago that showed a herd of about 20 boars chasing after a taxi whose driver was suspected of feeding the animals.

Wong said the main reason for the rise in boar sightings was that people were feeding the animals, which drew them out of their forested habitat into urban areas.

Singer Coco Lee's elder sister, Nancy Lee, said she did not think that killing boars was the only solution, and suggested moving them away from built-up areas.

"It should have been handled before it got so out of control," she added.

Read Also
Mouse shows up at store in Harbourfront Centre, has people squeaking in delight 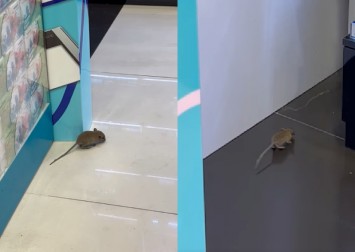 Dr Fiona Woodhouse, deputy director of welfare at the Society for the Prevention of Cruelty to Animals, said long-term management of the wild boar population demanded a combination of methods.

She felt that educating the public, banning the feeding of the animals and better control of rubbish bins to make scavenging harder could all prove more effective than sterilising or putting them down.

"Ideally, interventions at the pig level should be minimal," she added.

Noting that the main concern was the appearance of wild boars in urban areas, assistant professor Hannah Mumby, of the University of Hong Kong's Ecology and Biodiversity Division, said removing potential food sources and securing food waste would help.

However, she said that it was only sensible to include euthanising the animals when reviewing strategies to control the population.

"It would not be unusual. In many places, the use of lethal means is an important part of the management strategy," she said.

"The AFCD has to consider the health and behaviour of animals and the whole ecosystem that is at stake, not just one individual species."