'HOTPOT' to 'HASHTAG': Hong Kong driven to distraction by multi-million-dollar vanity licence plates with one sold for $4.6 million

Hong Kong is a city obsessed with vanity car plates

Walk the streets of Hong Kong and it soon becomes clear that the city just loves vanity car license plates.

So does amateur number-plate cruncher Jamie Lloyd: "My favourite is 'BATMAN' on a Rolls-Royce," said British-born Lloyd who has called Hong Kong home for 50 years, adding: "'BIMBO' on a Lamborghini is also fun!"

Personalised plates – which are sold at auction by the government's Transport Department – are big business.

In 2021, a "W" plate smashed records when it was auctioned for HK$26 million (S$4.6 million). The owner's identity is not known but the car it now adorns is a black Lamborghini.

That topped the previous record set in 2016 when someone forked out HK$18.1 million for the number "28". A year later, another car owner paid HK$13 million for the letter "V".

License plates which include the number "8", lucky in Chinese culture because when spoken in Cantonese it sounds like wealth, are much sought after.

While the number 13 is considered unlucky in the West, it ranks ninth among the city's top-priced plates, selling for HK$7.4 million in 2010.

Lloyd shares a vast body of number plate knowledge on j3tourshongkong, a website that includes 30 years worth of data.

Lloyd said status and bragging rights are motivations behind owning a vanity plate.

"Dropping US$3 million (S$4.1 million) on a plate announces to the world that you have substantial means. It's a very clear message," he said.

"Cecil Chao the [HK] billionaire has three that I know of: two Rolls-Royces, one with the plate '4', the other with 'CECIL' and a Bentley with 'CHAO'," he said.

"A little-known fact is that the money paid for license plates at auctions goes to charity and, presumably, is a tax write off, which explains why someone can pay HK$26 million for one," said Lloyd.

Italian Michele Salati has been obsessed with vanity plates since arriving in Hong Kong seven years ago.

Read Also
Got such thing in Singapore ah: Different types of licence plates 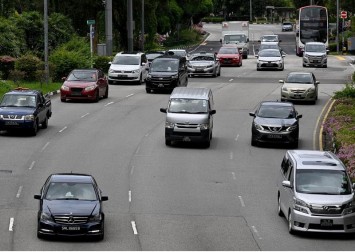 "The first plate I fell in love with was 'OK LA'," he said, referring to a common Hong Kong word that's an exaggeration of OK. It was on an iconic red taxi.

"'MEATBALL' and 'HKHAPPY' are great too," he added.

"I started seeing each plate as a line of poetry racing through the streets, and like poetry in motion I came up with the idea to create poems," said the creative director from Paris. "I'm on a sabbatical in Europe … I'm back in Hong Kong in January."

Each plate, he said, is a statement about status, wealth, humour, desires and superstition.

"Hong Kong is constantly changing," said Salati. "It can be hopeful, proud, fearless, fun, crazy... It makes sense that a city so visually stimulating uses vanity plates to make statements."

As for Lloyd, he doesn't see Hong Kong's appetite for vanity plates waning.

He predicts record-breaking sales next year.

"There's pent up demand because the last three new year auctions were cancelled due to Covid restrictions.

"I think the HK$30 million mark will be easily breached."