When Jenny Li took her six-year-old son to the airport for a flight from Beijing to Los Angeles, she was unsure if they would be able to board the plane.

It was the height of last month's Omicron outbreak in the Chinese capital, and her travel plans were mired in uncertainties.

With the city in partial lockdown, public transport between her home and the airport was suspended. Flights could be cancelled at any moment, and there was a possibility border control staff could prevent them from leaving, despite confirmation from China's immigration authorities that she and her son could travel.

"I was jittery. Many rules and routines have been changed under China's stringent Covid-19 controls," said Li, 46, a Beijing resident whose American-born son was about to start school in the US.

Li was prepared for difficulties, after hearing stories from friends who had encountered trouble or failed to leave the country as China encouraged people to cut "unnecessary trips" during the pandemic.

But she was still startled when border control officials stopped her for an hour-long inquiry. "I argued China's policy does not prohibit people from leaving. They said implementation could be flexible for the sake of Covid-19 control," Li said.

After a prolonged discussion the travel documents were confirmed, but they were still reluctant to let Li go so she called the National Migration Administration's hotline and was finally allowed to leave, 10 minutes before the plane's departure.

"It felt like having a heart attack. My hands were sweaty, and I trembled all the way from Beijing to Hong Kong, our transfer airport," Li said. "One month later, when I recall the moment, the desperation and anxiety still make me feel choked."

Anxiety and depression increased globally by a massive 25 per cent in the first year of the Covid-19 pandemic, according to a scientific brief released by the World Health Organisation (WHO) in March.

One major explanation for the increase was the unprecedented stress caused by social isolation. Linked to this were constraints on people's ability to work, seek support from loved ones and engage in their communities, according to the WHO.

Loneliness, fear of infection, suffering and death for oneself and for loved ones, grief after bereavement and financial worries have also been cited as stressors leading to anxiety and depression.

Among health workers, exhaustion has been a major trigger for suicidal thinking, the WHO report said.

"The information we have now about the impact of Covid-19 on the world's mental health is just the tip of the iceberg," said WHO director-general Tedros Adhanom Ghebreyesus at the briefing.

"This is a wake-up call to all countries to pay more attention to mental health and do a better job of supporting their populations' mental health."

In China, where Covid-19 curbs have often been the most draconian and frequent - from stay-at-home orders to school and business closures, as well as the unpredictability of restrictions - the figure could be much higher.

A national survey on the psychological effects of the pandemic, taken in 2020, found that 35 per cent of the more than 52,000 respondents experienced distress, including anxiety and depression.

In a paper published by General Psychiatry in February 2020, the Chinese researchers, led by Qiu Jianyin from Shanghai Mental Health Centre, said the unprecedented quarantine measures in China triggered a number of psychological problems.

These included panic disorder, anxiety, and depression, with the young, elderly, women and migrant workers identified as the most vulnerable groups.

While the initial panic stemmed from the new coronavirus itself and the stigma of being infected in the first waves of the pandemic after it emerged in Wuhan in 2019, experts say the latest sources of anxiety related to the consequences of how China's zero-Covid policy is managed.

Yu Lingna, a Chinese psychologist and founder of Tokyo-based Yingxintang, a psychological consulting service for people affected by the pandemic, said "they are anxious or even angry. 'When will all this end?' is a frequently heard [cry] of complaint".

"In the latest wave of this year, many Chinese people, especially the young and those with no underlying diseases, have had little worry about coronavirus. However, anxiety and panic are still prevalent," she said.

"They worry about shortages of essentials, living conditions in makeshift quarantine hospitals, children under quarantine alone, pets left behind after owners are sent to quarantine venues, as well as financial pressure from decreased incomes."

A survey of more than 1,000 Shanghai residents in mid-April suggested that 40 per cent of respondents were on the brink of depression about two weeks into the city's lockdown, according to Data-Humanism, a WeChat account specialising in research.

Shanghai's lockdown lasted two months - the longest of any major city - finally ending in June and leaving in its wake lost incomes, stress and despair for its millions of residents who also struggled to access food and emergency healthcare.

People died waiting for the nucleic acid test results they needed before they could receive medical treatment for diseases unrelated to the pandemic.

Meanwhile, children with Covid-19 were separated from their parents in hospital and there was a public outcry when quarantine workers entered homes without permission to spray disinfectant.

The tragedies were piling up before local governments vowed to correct some of their most widely criticised practices, according to media reports and social media posts.

Yu said many Shanghai residents have developed "Covid fatigue" after their two-month confinement - bored with social distancing measures and policies, and avoiding news about the virus.

Quite a few people she has counselled are also increasingly worried about their economic prospects and financial state, she said. "The pandemic has changed many people's life and work, leaving a collective psychological trauma which is to be assimilated."

China's zero-Covid rules are putting a huge strain on the economy, much to the frustration of private companies and the foreign business community, with lockdowns confining hundreds of millions of consumers to their homes and hitting supply chains in the spring.

But while the pandemic is ebbing in China, local governments have been slow to lift Covid-19 curbs.

Zhou Na, 36, said she was so worried about losing her job as a waitress at a Beijing restaurant that she found sleep a big problem recently. "I begged my manager to mark some shifts for me so that I can raise my family," she said. 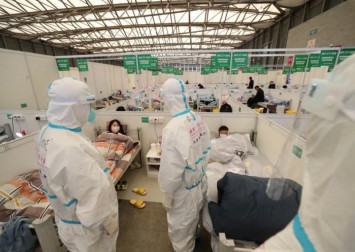 Beijing banned dining in restaurants on May 1 to contain an outbreak of the virus, with only takeaways allowed. The ban was removed in most parts of the city on June 7.

"Consumers are coming back, but the number is fewer than before. My employer has announced a layoff plan as he said the business was at a loss," Zhou said.

Before she could enter a public hospital to ask for sleeping pills, Zhou was required to have a PCR test and complete a questionnaire which checked patients' anxiety about Covid-19 and their mental status.

Questions included whether they are finding it "hard to calm down", "difficult to breathe" and "feeling life is meaningless".

"I chose the option 'not worried about the virus', as media reports say it is not very deadly," Zhou said. "Meanwhile, I ticked the box 'I don't think I deserve to be a person. I think it's an accurate depiction of my current status."

An editorial in the June 11 issue of The Lancet journal highlighted the human cost of China's dynamic zero-Covid strategy.

"This cost will continue to be paid in the future, with the shadow of mental ill-health adversely affecting China's culture and economy for years to come," it said.

"The Chinese government must act immediately if it is to heal the wound its extreme policies have inflicted on the Chinese people."

Psychiatry and mental health services in China have been traditionally marginalised, with limited resources. Although some progress has been made in recent years, mental health resources and the psychiatric workforce in China are still insufficient.

The total number of Chinese mental health workers is only 8.90 per 100,000 population, compared to 20.6 in upper-middle-income countries, according to data from WHO's Mental Health Atlas 2017.