Hung Hom station at risk of cracking due to being overloaded, says government-appointed expert

The Hung Hom MTR station, of the Sha Tin-Central link, which has been plagued by a scandal of shoddy work.

A government-appointed expert has warned of structural problems at the Hung Hom station platform of the Sha Tin-Central link, contradicting the findings of an official commission of inquiry that investigated allegations of shoddy construction at Hong Kong's most expensive railway project.

Professor Francis Au, head of the department of civil engineering at the University of Hong Kong (HKU) found that about eight connecting joints at the scandal-hit Hung Hom station platform would be overutilised, leaving the joints at risk of cracking, the Post has learned.

Au's report, however, was not taken into consideration by the commission of inquiry into shoddy work on the HK$97.1 billion (S$16.6 billion) Sha Tin-Central link. The expert report was only submitted to the commission after it handed over its interim report to the government at the end of February.

Contrary to Au's findings, the commission concluded in its interim report that the construction works for the Hung Hom platform and diaphragm walls were safe. But according to Au's review of the internal stresses of 25 construction joints of the structure, a copy of which the Post has obtained, eight joints were found to be overutilised - or their allowable strength overloaded - by up to 136 per cent. 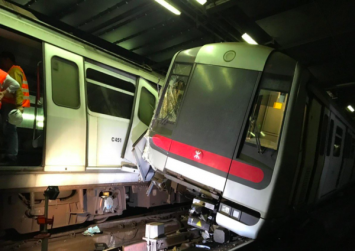 The HKU academic, appointed by the government to give his independent expert opinion to the commission, carried out the calculations in a lab based on the data provided by the project consultant Atkins.

"Partially engaged couplers or lack of engagement will therefore have adverse effects on the above assumption," it said.

Au called for a more sophisticated assessment of the structure's internal stresses for identifying the necessary strengthening works.

On Tuesday, the commission, chaired by Michael Hartmann, a former non-permanent judge on Hong Kong's top court, released its interim report on the scandal.

Despite saying work was not executed to plan, with "isolated and sporadic incidents" of bars being shortened, it concluded the platform was safe and did not need rebuilding or strengthening.

However, Jason Poon Chuk-hung, managing director of subcontractor China Technology Corporation, said on Wednesday he was considering whether to take legal action against the government and the commission for failing to consider Au's report.

"I am now studying with my lawyers the possibility of launching a judicial review against the concerned parties over the findings as it is obvious there are some errors in the report," he told a radio programme. "And also that this report has failed to consider all the facts."

Main contractor Leighton Contractors (Asia) hired China Technology to carry out concreting work for the expanded platform in the Hung Hom station. Allegations surfaced that steel bars used in reinforced concrete were cut short to fake proper installation into couplers on the platform and also that there had been unauthorised design changes.

Poon said: "We are now looking at whether the government and its Executive Council have done wrong in adopting the report, and whether the commission of inquiry has made an inappropriate decision which was not based on all the facts and excluded some important viewpoints."

Calling the inquiry a waste of his time and money after spending more than half a year helping it, Poon said: "I am not saying the structure is not safe. But I can only be convinced about its safety if the commission has taken all the objective and independent views of the testifying experts."

Jacob Kam Chak-pui, incoming CEO of rail operator the MTR Corporation, said he hoped the firm could make a decision before August on whether to partially open the link as the move would involve lots of changes including to the signalling system.

He added that the company would wait until the final analysis of the station was completed before deciding whether to conduct strengthening works.

So far, 27 per cent out of 48 steel bars checked were found to be substandard, with an embedded length shorter than the required 37mm.

The commission was originally expected to submit a final report to the chief executive on the safety of the Hung Hom station platform structure in February. But new controversies erupted in January over a large number of missing inspection documents and unauthorised structural changes at another three locations in the Hung Hom station.

Subsequently, Lam decided the expand the scope of the commission to conduct an investigation into the newly revealed issues at the other affected areas. The commission has issued an interim report to first allay the safety concerns. It expected to hand in its final report to Lam by the end of August.

The setting up of a judge-led commission of inquiry to resolve controversial issues has been a common practice since the days of colonial rule in Hong Kong. A typical example was the formation of the Kowloon Disturbances Commission of Inquiry, presided over by Justice Michael Hogan in 1966, to look into the causes of turmoil that year. The incident concerned several thousand people assembling along Nathan Road, throwing stones at police and setting fire to cars in protest against an increase of second-class fares on the Star Ferry. It resulted in one death and 1,800 arrests.