Screen grabs from a Facebook video showing a group of hungry bulls in a ParknShop in Mui Wo.

A supermarket on Lantau Island had some unexpected visitors on Thursday night, when a group of hungry bulls wandered the aisles and fed on fruit, prompting a concern group to call for more public awareness of diminishing grasslands and the dangers of humans feeding wild animals.

The bulls in Mui Wo, a rural town on the eastern coast of Lantau Island, stole the limelight as Hong Kong enters the Year of the Pig.

At least three of the animals were filmed in a ParknShop outlet, enjoying a buffet of fruit displayed in cold storage units and on shelves close to the entrance.

The bovines munched on apples and cherries but ignored a banana held out by a customer. They reportedly lingered in the shop for a short while before leaving.

The supermarket said staff notified police, and disposed of the contaminated produce before sterilising the affected area.

The video went viral on social media, with many seeing the funny side.

But Ho Loy, chairwoman of the Lantau Buffalo Association said the film was a reminder of the plight of the island's wild cattle, who had been affected by changes to their habitat.

"A lot of farmland has been turned into football fields or warehouses in recent years. The bulls simply do not have enough room to rest and not enough grass to eat," she said, adding that some grass areas had been polluted by illegal dumping of waste, which the government has failed to prosecute effectively. 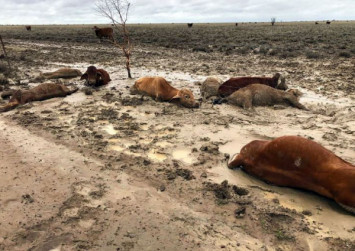 Ho also said that, as the number of tourists and residents has increased, the wild animals have become less inhibited and got used to humans feeding them.

She urged visitors to keep a distance from cattle and not to feed them human food.

In November, an eight-year-old bull called Billy who lived on Pui O beach on the south of Lantau Island was found dead, his stomach and intestinal tract blocked with enough plastic bags to fill two rubbish bins.

A survey conducted by the government in 2013 revealed there were about 1,110 head of cattle and 120 head of buffalo distributed across Lantau Island, Sai Kung, Ma On Shan, and the central and northeastern parts of the New Territories.