Husband assaults doctor for refusing to perform C-section on wife 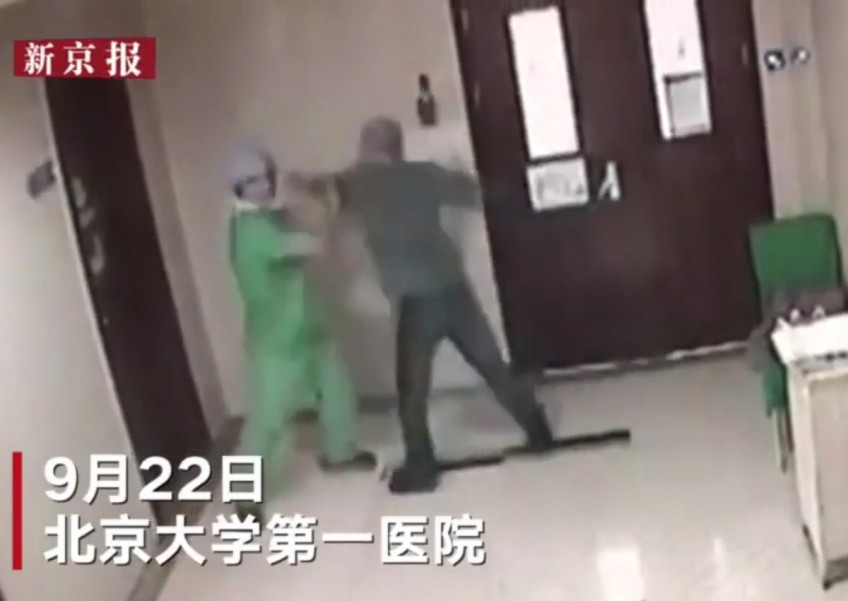 A husband accused of assaulting a hospital gynecologist who refused to perform a C-section on his pregnant wife late last month was detained on Saturday by Beijing police.

The suspect, identified only as Zheng, 46, is alleged to have repeatedly punched the doctor, He Yingdong, during an argument at Peking University First Hospital on Sept 22.

Zheng had confronted He in a corridor and demanded he perform a C-section on his 44-year-old wife, identified as Sun, who had been admitted to the hospital's maternity unit, according to the Xicheng district police.

The doctor felt the operation was unnecessary, but as he was explaining his reasons for the decision Zheng started to punch him, resulting in a brawl. Bystanders were forced to separate the pair, the police said.

Later, Sun and the couple's 19-year-old daughter arrived on the scene from another part of the hospital, and then Zheng and the teenager attacked He again. This time, the doctor did not fight back for fear of hurting Sun, the statement said.

Sun gave birth to a girl the next day. As they felt she would need her family to take care of her, the police said they delayed taking Zheng and his daughter into custody until Saturday.

Police did not say why Zheng had demanded a C-section for his wife. However, He Wenjie, a gynaecologist at the Xuzhou Maternity and Child Healthcare Hospital in Jiangsu province, told China Daily that, in his experience, older couples are sensitive to the higher risks involved in natural childbirth when the mother is in her 40s.

Zheng's daughter, who is studying at university, has been released on bail and could still face criminal charges, the police said.

Zhan Ruixi, another gynaecologist at Peking University First Hospital, said in social media posts that He had turned down the C-section request because there were no indications it was necessary.

His colleague had suffered injuries to his head and had been hospitalised for treatment, Zhan said. "We hope the law can protect medical workers," he added.

On Friday, Peking University First Hospital issued a statement strongly condemning the perpetrators and calling for severe punishment for those who commit violence against medical workers.

The Chinese Medical Doctor Association said on Saturday that it also condemns all forms of violence against doctors and nurses, adding that it expects medical institutions to take effective measures to ensure the safety of medical workers while on duty.

Incidences of doctor-patient disputes in China remain relatively low considering the size of the country's health service, Guo Yanhong, deputy head of medical administration and supervision for the National Health Commission, said at a news conference in September.

The number of medical disputes had fallen by 20 per cent compared with 2013, she said, adding that improved medical services had been a major factor in improved doctor-patient relations.

ALSO READ: Pregnant China woman jumps to her death after family refuse to give consent over Caesarean section