'I beat whenever I want': Chinese boy, 8, violently assaults 2-year-old girl for snacks

An 8-year-old boy filmed beating a two-year-old girl and knocking her to the ground has outraged the Chinese public and generated debate about child-rearing.

The boy, surnamed Zhuang, is a second-grade primary school student in southern China. Zhuang was filmed brutally beating the girl — so he could steal snack food she was holding. He attacked the girl so violently that four of her teeth were damaged.

Zhuang walked into the girl’s home, where she was alone playing, before physically assaulting her to steal the snacks.

Zhuang started kicking the girl’s head after she declined to hand over the snacks. He continued the assault even after the girl fell down tried to stand up and escape. He fled when the girl’s grandpa came upon the scene.

The video has attracted widespread attention due to the extremely violent nature of the attack.

“The parents of Zhuang tried to deny the attack happened until we showed them the surveillance video,” the girl’s parents wrote in an open letter.

“I beat whenever I want,” Zhuang replied when the victim’s parents confronted him.

The girl suffered head trauma and had four of her teeth damaged which required two months of treatment. She has been traumatised by the assault.

The girl’s family say they are outraged by the attitude of the boy’s family who did not apologise or express any remorse over their son’s actions. However, they begged the girl’s parents not to call the police.

“We can’t afford to compensate you, and there is nothing you could do to punish us,” the boy’s parents allegedly said when confronted.

The girl’s family who initially had planned to give the boy an opportunity to apologise decided to call the police after his parent’s aggressive and unrepentant response, with the case now under investigation.

Read Also
Man left bleeding from head after he was allegedly beaten up at Clarke Quay, 3 men arrested 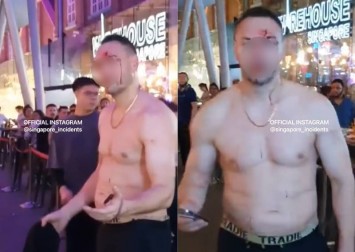 After the attack was reported in the media there was immediate discussion on social media in China, on Weibo there were 17,000 comments on a post containing the video at the time of writing.

Many users have criticised the boy’s behaviour and his family’s response, as well as laws on the protection of children.

“What would happen if her grandpa didn’t show up right at the time? It’s so scary,” said one commenter.

“Oh my God, that poor little girl! How could the boy’s family behave like this? Really, I hope the police impose punishment on the boy,” another commented.

In 1991, China passed a law on the protection of juveniles that regulated minor offenders aged below 14-years-old and determined they should not bear any criminal responsibility.

A lawyer at a Shanghai-based law firm told the South China Morning Post: “If a person who has not attained the age of 14 commits such an act, he shall not be penalised, but his guardian shall be instructed to subject him to strict discipline. In this case, the parents of the boy might be asked to better monitor their child and pay compensation to the victim.”