Ouyang Nana (left) was blocked out of this magazine cover during a Beijing TV programme.

In another case of a celebrity getting embroiled in escalating Beijing-Taipei tensions, 18-year-old Taiwanese actress and musician Ouyang Nana has declared her love for China in a television appearance after a strong mainland backlash that threatened her career.

"It doesn't matter if I'm from Hong Kong, Taiwan or Beijing … I am Chinese - I love my country," the actress, who was born in Taipei, told CCTV6, a channel of China's state broadcaster.

She also wished the country prosperity as it marks the 70th anniversary of the founding of the People's Republic of China.

"I hope everyone together can bravely express our viewpoints, work harder to unite, and make our country proud," she said in the interview, which aired on Monday.

To underline her message, Ouyang also sang My Motherland and Me - a popular patriotic song from the 1950s.

It came after Ouyang found herself at the centre of controversy last week after a Beijing TV programme edited her out of magazine images in which she had appeared with three other actresses - Guan Xiaotong, Wendy Zhang and Vicky Chen. The four are regarded as rising stars in China.

It did not go unnoticed on social media, with speculation that it was because of her father, Ouyang Long, who is a spokesman for Taiwanese opposition party the Kuomintang. Although it is seen as Beijing-friendly, the KMT takes a "no unification, no use of force" approach to cross-strait ties.

Ouyang Nana's agent swiftly released a statement on her social media accounts on Thursday in response to claims that she was a supporter of Taiwan independence, distancing her from her father and saying that she was 18 and had her own independent thoughts and will.

"[She] firmly supports the one-China principle," the statement read.

Beijing sees Taiwan as a renegade province subject to eventual reunification with the mainland, by force if necessary.

Ouyang, who is studying at Berklee College of Music in the United States, shared the post on Weibo, adding that she was proud of being Chinese and would always remember her roots. The entertainer's grandparents come from the east and southwest of China, in Jiangxi and Sichuan provinces. 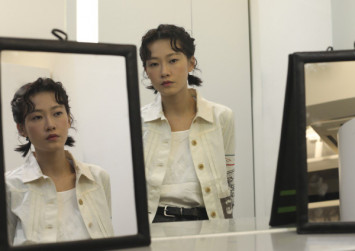 Her father also joined in the firefighting, telling Taiwan's EBC News on Thursday that he could not believe anyone would think he supported Taiwanese independence. Ouyang Long also said he was dismayed that his daughter had been affected by his job in politics.

Ouyang Nana was the leading actress in the Jackie Chan sci-fi film Bleeding Steel and has worked with screen idols including Andy Lau Tak-wah, Huang Xiaoming and K-pop star Choi Si-won. She has 14.3 million followers on Weibo, almost 936,000 followers on Facebook and 2.3 million on Instagram.

Her television interview drew sympathy from some mainland Chinese on social media, who said they were sorry she was caught up in the issue at such a young age. Others were cynical, saying she would say anything to avoid harming her earning potential on the mainland.

But in Taiwan, people were angered, with the top comments on her post on Facebook - which is blocked on the mainland - accusing her of selling out.

"The country in my heart is Taiwan - no 1992 consensus, no one-China principle," a user called Chen Chan-ying wrote. "Kneeling for so long, it's OK that your knees can't straighten up any more. Live a good life over the strait."

It is not the first time a Taiwanese celebrity has stirred controversy over their political views. Taiwanese singer and actress Vivian Hsu was removed from the line-up of a reality show by Hunan-based Mango TV in 2016 after comments she made on Beijing and Japan in 2010 resurfaced. She had complained about the Taiwanese delegation not being able to walk the red carpet at the 2010 Tokyo International Film Festival due to pressure from Beijing, and said Japan was like an adopted mother to her.

Other celebrities from Hong Kong and Taiwan have meanwhile faced repercussions over perceived pro-independence stances. Hong Kong singer Denise Ho Wan-sze has not performed over the border and her music has been removed from major mainland streaming sites since media outlet Sina News reported on her political views in 2016. Ho supported Taiwan's "sunflower movement" in 2014 and the Occupy Central protests in Hong Kong the same year.