'I regret it': Man on trial in China for allegedly murdering his wife and using meat grinder to dismember body and flush down the toilet

The victim Lai Huili and the apartment building.

A man in China who offered a 100,000 yuan (S$20,700) reward and did multiple television interviews begging for help finding his missing wife went on trial for her murder on Friday (May 14).

The case grabbed national attention in July last year when Xu Guoli from eastern Hangzhou, then 55, appeared calm and eloquent during the interviews describing how his wife, Lai Huili, left home while he was asleep, but was revealed as the prime suspect in her murder 16 days later.

Police spent more than two weeks searching the apartment building and checking 6,000 hours of surveillance video footage hours before concluding Lai had not left the apartment complex after returning home with her daughter the previous afternoon.

They eventually spent 25 hours draining the building’s septic tank and checked faeces from 38 waste removal trucks. DNA testing found traces of Lai’s body tissue. Xu was taken into police custody on July 23 and confessed to the murder hours later, according to a police statement.

In court, prosecutors accused Xu of drugging Lai’s milk before sealing her mouth with tape and smothering her to death on the night of July 4. He then moved her body to the bathroom and dismembered her. Some of the body parts were flushed through the toilet and others thrown in the garbage, according to a statement in the Hangzhou Intermediate Court.

Xu, who had known his wife since 1988 but broke up three years later after he joined the army, got back with Lai after he was discharged. The two got married in 2008 and had a then 12-year-old daughter. They two each had a child from previous marriages. It was Xu’s first daughter who reported to police that her mother was missing two days after the alleged murder.

Xu told the Hangzhou Intermediate People’s Court that he held a grudge against Lai after 2018 and the two often got into fights, sometimes the fight became physical because he felt Lai did not respect him and often called him “useless”, according to the Chongqing Morning Post.

The wife would not let him intervene in their daughter’s education even though she was falling behind academically. In 2019 the couple were compensated with two apartments after a land eviction, but Lai only put down her own name as the owner.

Xu said he had been feeling depressed for a long time and was once suicidal because he felt his wife did not respect him but did not dare to jump off the building when he reached the 28th floor.

He denied the murder was premeditated, saying it was an impulse on the afternoon when the two used a meat grinder to prepare dinner but had a fierce argument. He denied the tools used in the crime, the meat grinder, cutting machine and knife bought at the beginning of last year were meant for killing his wife, saying they were used in their daily life. 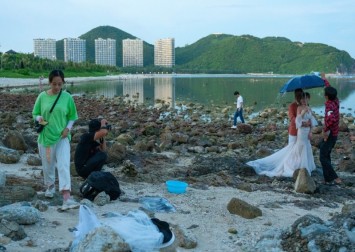 His lawyer also asked to have his mental state examined and requested a lenient sentence, but prosecutors argued the current evidence was sufficient to prove the murder was planned and that his family had no mental illness history, while Xu had hindered the police investigation — proving his mental state was stable.

Their 13-year-old daughter, wrote to the court to plea for the father, saying he had been a very devoted father and wished the court would not sentence her father to the death penalty so that she could still have a parent.

Xu became very emotional hearing the plea. He told the court in tears that he failed his daughter and his wife even though he loved her very much.

Lai’s two daughters filed a civil lawsuit against Xu for 2.17 million yuan as compensation, which Xu said his personal assets would be able to cover.

The hearing concluded with a conviction and sentencing to be handed down at a later date.