'I watched him washed away': Search for Chinese boy, 3, who fell down manhole

A three-year-old boy is missing after falling into manhole in a case which highlights the ongoing problem of manhole cover theft in China.

Chinese authorities are still searching for a three-year-old boy who went missing after falling into a manhole last week.

The incident occurred when the boy was walking beside his father towards their car in a suburb of Xi'an, Shaanxi province, northwestern China, last Thursday (May 12) evening in the rain, state broadcaster CCTV reported. The boy's mother and sister were walking behind them.

The boy's father, surnamed Yang, said it was a dark evening and there was no lighting nearby. The manhole the boy fell down was uncovered, he said.

After hearing his son's crying, Yang used his mobile phone light and saw the boy sitting at the bottom of the hole.

The manhole is rectangle-shaped, measuring about 60cm by 25cm. The pit is shaped like a funnel, with the lower part narrower than the top section.

Yang said he crawled down into the hole, as his wife held onto his legs. He saw his son had been pushed further down the hole by the fast-moving sewage water.

He said one of his shoulders was caught by a pole, preventing him from reaching his son.

"I wanted to reach him, but I was not able to. I had to helplessly watch my son being washed away," Yang recalled.

Rescue workers were soon deployed to search for the boy and by the end of Sunday had checked 4.8 kilometres of drainpipe, but were unable to find him.

Authorities are investigating the cause of the accident as it is unclear if the manhole cover was washed away by rising water or stolen. 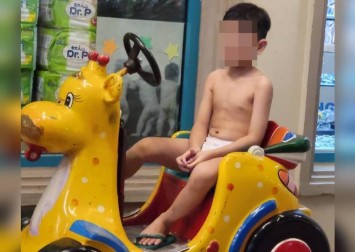 The accident is one of many cases of injuries or deaths caused by the absence of manhole covers in China. Between 2017 and 2019, there were more than 70 accidents caused by broken or missing manhole covers, according to China's procurator authority.

In February, a man in northern China fell down a manhole into waist-deep water, the Xiaoxiang Morning Herald reported.

He was lifted out of the hole by a friend. The man said they found another manhole about a dozen metres away also without a lid and without any warning signs. He was later given 1,500 yuan (S$308) in compensation by the road construction company responsible.

In another case, a 10-year-old boy died after falling into a manhole in Wuhan, Hubei, central China in 2019. His body was found 500 metres from the hole, stuck in a smaller pipe.

China's Supreme People's Procuratorate amended the law two years ago to strengthen punishments for those who stole or damaged manhole covers or whose actions lead to injuries or fatalities. The new regulations stipulate that offenders can receive the death penalty in the most serious cases.