Beijing on Sunday (June 19) announced the appointment of Hong Kong’s principal officials to incoming leader John Lee Ka Chiu ’s cabinet, hailing it as a “diversified team” while also laying down its expectations for the new administration to unite society and make “greater achievements”.

Lee followed the State Council’s announcement by presenting to the public his 26-member team, including seven incumbent political appointees, two undersecretaries, six serving or retired civil servants and four lawmakers. Chief Executive’s Office director Eric Chan Kwok Ki will take up the role of No 2 official as the chief secretary.

“This team is united and loyal,” Lee said at a press conference to introduce his core leaders to help him start a “new chapter” for Hong Kong. “We share the same ideal of governance, and will be result-oriented with an emphasis on team spirit and execution.”

But it also laid out five expectations for the incoming administration, asking it to tackle the city’s social issues such as housing, address the wealth gap and youth development, implement the “one country, two systems” governing policy in an accurate manner, facilitate integration with the nation’s development, and do more for education, technology, culture and health.

Beijing’s liaison office also spelled out expectations in what it described as a critical phase of the city’s transition “from stability to prosperity”.

“The new government is expected to … broadly unite people from all walks of life, uphold the principle of ‘patriots ruling Hong Kong’ to improve governance and tackle deep-seated issues,” the office said.

Facilitating the city’s integration with national development and enhancing its international competitiveness were also the stated goals.

“Respond to expectations with practical actions and make greater achievements at the new starting point,” the office said.

Twelve days ahead of Lee’s swearing-in on July 1 to take over from Carrie Lam Cheng Yuet Ngor as the city’s next chief executive, the team he unveiled reflected some continuity as well as a considerable shakeup under the self-described “conductor” of Hong Kong’s “new symphony”.

“My team and I will reach out, listen to, and communicate with the public with sincerity. We will be proactive in winning the trust of the people, and make policies that meet with demands,” Lee said.

The chief executive-designate’s governing plan entails a massive restructuring which could cost taxpayers an extra HK$120 million (S$ 21 million) a year, with 15 policy bureaus – increased from 13 – reporting to three secretaries of bureaus and their deputies.

Lee, 64, a former career policeman-turned-top bureaucrat, was the security chief when Hong Kong was rocked by anti-government protest chaos in 2019, but he now takes over a city where such turmoil has been wiped out under the national security law imposed by Beijing.

Speeches on Sunday by Lee and most of the attending principal officials, including three who headed disciplinary forces, highlighted their priorities in safeguarding national security on all fronts, ranging from financial to educational.

“Some bullying countries have hoped to scare our officials by using sanctions… This will only make us more persistent to carry on maintaining national security,” Lee said.

“I only have one goal: to fulfil my responsibility to the country through safeguarding its sovereignty, safety and development interest. That is the responsibility of being a Chinese citizen.”

Financial Secretary Paul Chan said various measures had been prepared to respond to the possibility of more American sanctions, adding that officials would also actively spread the message to the international community that Hong Kong remained competitive and would continue to prosper with the nation’s backing.

Lee and his aide, Eric Chan, were among officials targeted by the sanctions over the national security law, which Washington said had “undermined Hong Kong’s autonomy and restricted the freedom of expression”.

Chan, 63, thanked the incoming leader for his “full trust” in him and pledged to enhance communication with policy bureaus as well as mainland officials.

Beijing greenlit Lee’s proposed team line-up more than a month after he was chosen by the city’s powerful Election Committee.

When asked if his list of candidates was passed to national security police before it was submitted to the central government, he replied: “My selection of officials are my own ideas, and, of course, there will be necessary procedures to go through in accordance with the law and normal procedures.”

Lee’s incoming administration marks the first start of a new government term under the national security law, while a powerful vetting committee has been established to conduct political screening of election candidates but not officials. 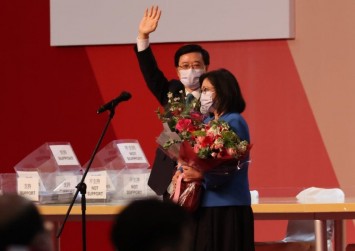 Sunday’s announcement will later trigger a by-election in the legislature for the seats vacated by four incumbent lawmakers from the Election Committee constituency who are now in the new cabinet.

Lee said the lawmakers and two other professionals he had picked from outside the government had their “own strengths, experiences and a strong will to serve Hong Kong”.

The two lawmakers from the city’s major pro-Beijing parties are Horace Cheung Kwok Kwan, vice-chairman of the Democratic Alliance for the Betterment and Progress of Hong Kong, who will take up the role of deputy secretary for justice, and Alice Mak k Mei Kuen from the Federation of Trade Unions, who becomes secretary for home and youth affairs.

The two professionals are mainland China-born scientist Sun Dong, who will take over as secretary for innovation, technology and industry, and accountant Nelson Lam Chi Yuen, who will become the new director of the Audit Commission.

Sun, the only one who spoke in Mandarin at the press conference, stressed that he had established extensive connections with different sectors in Hong Kong over the past two decades.

Elaborating on his “result-oriented” governance style, leader-in-waiting Lee said it did not mean a disregard for following established procedures.

“[Procedures] are created by policies and laws. If they are outdated, or if they are repetitive, we should improve them so as to make it easier to get results. I also believe people would like to see this happen,” he said.

Lee also thanked departing leader Carrie Lam, who congratulated the new government, expressing her wish for it to focus on development in accordance with “the spirit of not avoiding any difficulties” in solving economic and livelihood issues.

In another sign of Lee going for continuity, Chris Tang Ping Keung and Erick Tsang Kwok Wai will remain as secretary for security and constitutional and mainland affairs minister, respectively.

The three new deputy secretary posts have been created in recognition of the growing work of the bureaus.

Among those taking them up are two seasoned civil servants: former permanent secretary for innovation and technology, Cheuk Wing Hing, who will serve as deputy chief secretary after his 38 years in government; and development minister Michael Wong Wai Lun, who will become deputy financial secretary.

Professor Anthony Cheung Bing Leung, a former transport and housing minister, said it had proven that administrative officers were still the backbone of the government.

“The central government might have questions over the loyalty of these administrative officers due to what had happened in the last few years in the city with some negative comments targeting them as colonial remnants, but things have settled after the compulsory oath-taking for all civil servants,” said Cheung, who specialises in public administration at the Education University of Hong Kong.

“Who are the ones who are most familiar with policies and what changes are necessary? That must be our civil servants.”

“Remember that the people already have their own KPIs for the government such as public housing waiting times, number of families living in subdivided flats,” he said. “Lee’s KPIs are worthless if he and his team fail to address the people’s KPIs, the real measures of performance.”

When meeting the press, Winnie Ho Wing-yin, who will serve as housing minister, stopped short of giving concrete targets of shortening the queue for public housing or the number of new flats to be built in the next term. She said they would “resort to all means” to speed up the process.