Chinese internet users have criticised the penalty handed down to a cosmetic surgery operator who left a Chinese rising star’s nose blackened with dead flesh as too lenient.

The operator was suspended from her practice for a six-month period while the clinic she worked at faces fines of 49,000 yuan (S$10,081) after the 24-year-old actress and singer, Gao Liu’s four-hour nasal surgery left her disfigured.

“So, this is the punishment for crippling a human being?” asked one commentator on the news portal Paper.cn .

“The six-month suspension is just like a long holiday and they will make back the fines in one or two patients,” said another commentator.

Gao Liu shared the photos of her failed plastic surgery operation to her five million followers on Weibo in February, to warn others of the potential dangers of plastic surgery.

Her post generated a flood of anger from internet users who called for tougher regulation of China’s rapidly expanding cosmetic surgery industry after the actress revealed she was unaware the clinic where she had the surgery was unlicensed.

The Guangzhou Health Commission, where the clinic is based, released a statement on March 25  saying the clinic was unlicensed to carry out the surgery.

“I want to remind all women who chase beauty. You shouldn’t trust clinics that lack the proper licence for procedures. I only learned to research the qualifications after this incident,” Gao said on Weibo.

The surgery, which was performed in October, left Gao hospitalised for two months. She lost 400,000 yuan (US$60,959) in film deals and is facing an additional two million yuan (US$304,799) for breaking existing acting contracts.

Gao has not responded to the South China Morning Post’s  request for comment about the penalties.

In recent years, cosmetic surgery procedures have boomed in China due to the public’s growing demand for an attractive appearance.

But the demand has led to widespread unethical practices, with an iResearch report released last year, revealing just 12 per cent of China’s 13,000-plus beauty clinics are compliant with regulations. 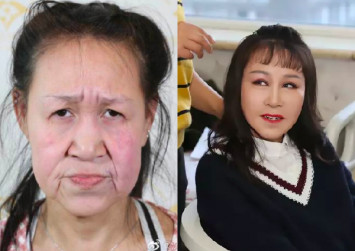 The report showed that 15 per cent of all cosmetic clinics in China or, more than 2,000 perform procedures they are unqualified or unlicensed to perform.

About 80,000 more beauty shops offer cosmetic treatments without the required medical licence with only 28 per cent of practitioners in the cosmetic industry having the appropriate qualifications, according to the report.

In 2018, the National Health Commission has registered 3,680 qualified plastic surgeons, but in practice, there are more than 38,000 operators working in the industry, about ten times the officially approved surgeon quota.

The report also found that only one-third of all drugs and medicines used during procedures were legitimate.