'It could be from anywhere': Is it fair to blame Hong Kong for Shenzhen's Covid-19 outbreak?

Some Shenzhen residents have faced weeks of daily tests.

Shenzhen residents have expressed growing concern as the city struggles to contain its current Covid-19 outbreak with rumours blaming illegal border crossings from neighbouring Hong Kong – even though the city has never confirmed how the outbreak started a month ago and dismissed the Hong Kong rumours.

But with the city reporting new cases for more than a month and some residents being ordered to take Covid-19 tests every day, the sense of frustration is growing.

Guo Qiaoqiao, a businesswoman who has been tested for the past 25 days, says she has had enough.

“This is what Shenzhen is like now, spending so many resources on screening tests to get zero-Covid. I feel it’s not possible,” Guo said. “The outbreak was said to be spread from Hong Kong by those who entered Shenzhen illegally, but even if that is not true, there are so many exchanges between the two cities and there is no way we can block it.”

But the spread of the Omicron variant – especially its BA. 2 strain – means it may no longer be possible to trace the source of various outbreaks.

Jin Dongyan, a virologist with the University of Hong Kong, said many people, especially those who have been vaccinated, could have been infected with Omicron but show little to no symptoms.

“The cases in Shenzhen might or might not be from Hong Kong. They could also be from anywhere because Shenzhen is open to all different provinces and cities in China, not only Hong Kong,” Jin said.

In recent weeks China has recorded cases across the country, with only Ningxia, Tibet and Xinjiang spared in the latest outbreak. Shanghai, long seen as one of the country’s biggest Covid success stories, has seen more than 1,000 local infections this month .

Meanwhile, the northeastern province of Jilin is now battling the largest surge in cases since the early days in Wuhan with more than 10,000 symptomatic and asymptomatic cases in an outbreak the authorities believe started from an imported case of the Omicron variant that started spreading silently last month.

Zhang Yan, deputy director of Jilin’s health commission, said earlier this week: “Stealth transmission is one characteristic of the outbreak. The infected are mostly asymptomatic or have very few symptoms and are difficult to detect at early stage but can easily spread the disease in the community, which makes index case tracing and control much more difficult.” 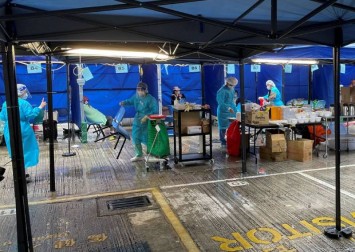 The health authorities have said they are confident that stronger control measures can curb the current outbreaks, but Jin warned that the way asymptomatic cases of Omicron can spread means China could face a larger outbreak than the Jilin one.

“It is certainly possible that there might be other places in China where there are hidden transmissions which are unnoticed … A major breakthrough is not impossible in China. You just need one case [to trigger] a disaster. The chances are high,” Jin said.

Nicholas Thomas, an associate professor at the department of Asian and international studies at City University of Hong Kong, said Omicron would give China “a potentially difficult few months”.

The experience of other countries shows Omicron could peak after a few weeks and infections tend to dip as it gets warmer, China’s situation could improve.

Thomas said the zero-Covid strategy had bought China time to vaccinate the population, but it now needs to change its game plan.

China has fully inoculated more than 87 per cent of the population but mostly with vaccines that have shown relatively low effectiveness in the face of Omicron.

“I think it’s definitely going to get worse before it gets better. If the authorities were to introduce vaccines that are more effective, that impact would be less disruptive than what is always going to be,” Thomas said.