'It's a man!' Online scammers using fake naked women for blackmail in China

A handout photo. Scammers are using fake skin and faces to impersonate women online to lure men into removing their clothes while secretly recording so they can blackmail victims for money.

They say seeing is believing, but that is not necessarily the case if a pretty girl online starts a video chat with you, especially if she asks to have a nude chat.

Police in China have issued a warning about fake women online who use false skin to make themselves appear female and entrap men into removing their clothes and then blackmailing them.

Scammers use human skin, breasts and facial features, according to a video warning posted online this month by mainland police.

Internet users were stunned by the video that features an example of a fake woman. In the clip, a woman appears wearing nothing but a bra and underpants and starts to remove her skin from below the neck.

Seconds later the woman’s breasts are revealed to be a man’s chest with the fake skin pushed down below the waist.

She then starts to pull the mask off her face, before viewers are shown police photos of two men holding fake breasts and posing as women.

“You think what you think is what you think?” asked a female police officer in the video. “Boys, don’t chat nude. That’s fraud,” the warning said. 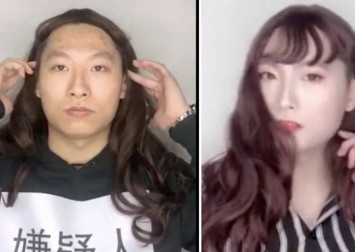 The video clip, posted originally on Weibo by police in eastern Zhejiang province, was shared by multiple police social accounts as a warning.

“This is painted skin in real life,” exclaimed one Weibo user, referring to the story of Painted Skin by Chinese writer Pu Songling in the 18th century about a monster painting pretty skins to wear on its body to marry a man.

“That’s why you should not have a relationship with someone you meet online, because the pretty woman can be a man!”, said another.

Police said criminals often obtained personal information and targeted victims with some kind of social status such as doctors, teachers and public servants.

Criminals often contact the victims on social media pretending to be an attractive woman, and spend time grooming them before luring them into recorded naked videos. They ask the victims to download an app, ostensibly to see more naked videos, so that they could gain the victim’s phone contacts.

The scammers would then threaten to send the videos to the victim’s family and friends unless money was paid. The blackmail often occurred more than once, police said. 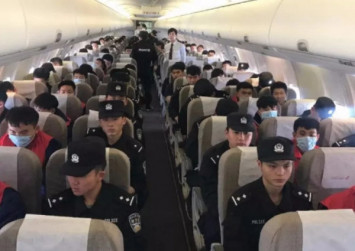 In recent years online fraud using naked women as bait has been increasing, especially during the Covid-19 pandemic.

A statement in June last year by the Guangdong Public Security Department revealed that the police received more than 9,200 reports of blackmail relating to nude chats in the first half of the year.

Police said 86 people from 10 different scammer rings were detained across the province.

In 41 trial cases whose indictments were released to the public domain, 2,000 people were blackmailed from 2011 to 2020, involving more than 24 million yuan (S$5 million), according to a Global Times report.