A team of scientists in China used DNA analysis of a fossil found in northeast China to identify what they believe is a lineage of tigers that diverged from today’s modern felines approximately 268,000 years ago.

The proposed evolutionary split would have happened far earlier than the previously known divergence around 125,000 years ago when what would become South China tigers (Panthera tigris amoyensis ) split from what eventually became the five other living species of tigers.

The scientists believe the newly discovered lineage of tigers evolved independently from modern tigers before eventually going extinct at an unknown date, according to a paper published in late July in Royal Society, a peer-reviewed journal.

Sheng Guilian, a study author and professor at China University of Geosciences (Wuhan) Future City Campus, told the South China Morning Post that the team was able to build an evolutionary tree using DNA and molecular analysis that allowed them to identify when different tiger species diverged.

The researchers analysed DNA samples of 40 modern tigers spread across the six living species, as well as one lion and one snow leopard.

“The tree shows that this new tiger is in another branch of the tree and formed a sister clade to all modern tigers,” Sheng said.

The researchers wrote in the paper that their findings support the idea that there may be more now-extinct tiger lineages that humans have yet to discover.

The new tiger was identified by analysing a lower jawbone found in a karst cave in Jilin province, northeastern China, and the researchers nicknamed the cat “Da’an tiger” after the cave’s name.

The area is consistent with historical ranges of tigers and is where Amur tigers (more famously called Siberian tigers) still live. The researchers hypothesised that the location of the fossil might mean the ancient tiger had specific genes enabling it to adapt to cold environments, also reported in Amur tigers.

Sheng said the scientists pinpointed that the extinct tiger evolved from modern tigers 268,000 years ago by using a strategy called the “molecular clock theory”, in which scientists can use the mutation rate of molecules to determine when animal species diverge.

“Before this study, all available research in terms of molecular evolution of tigers was based on modern tigers, which means we could only investigate the evolutionary process of their direct ancestors,” she said.

The discovery also highlights how valuable DNA analysis can be in biological sciences.

The piece of the jawbone excavated from Da’an was not large. Scientists initially thought it belonged to an ancient hyena because other hyena bones were found in the cave.

It was only through analysing the DNA that the researchers could determine that it was a tiger, not a hyena. 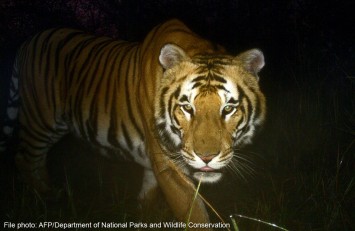 “It is not a surprise that you make morphological mistakes if you only get a small part of the [jawbone]. That is why ancient DNA is so important and helpful,” said Sheng.

Scientists would need to identify more bones to give it a specific species classification, and they are very far from figuring out what the ancient tiger might have looked like.

Interestingly, fossils from an ancient species of cave lions called Panthera spelaea have been found in the region, piquing the researchers’ interest in whether the lions and tigers interacted with one another. As of now, we do not have enough information to determine either way.

The oldest known fossil that is considered a close relative of tigers belonged to a species named Panthera zdanskyi. It was found in 2004 in Gansu province in northwest China and is estimated to be between 2.16 and 2.55 million years old.