In this hand out photo, police bust a counterfeit production workshop where a large number of knockoff bags were seized.

A joint crackdown by China and the United Arab Emirates has destroyed a network that produced and sold knockoff luxury bags on the global market, Shanghai police revealed on Monday.

A total of 57 suspects were detained, 18 production workshops were shut down and knockoff luxury products worth of 1.79 billion yuan (S$347 million) were seized in Shanghai, Guangdong province and Dubai in July, according to Shanghai police.

The network consisted of a marketing team based in Dubai that received international orders for luxury bags and clothes; production bases, including several in Guangzhou, Guangdong province, and in developing countries; and more than 200 distributors in regions and countries worldwide.

According to a news release from Shanghai police on Monday, police in Dubai had been trying to pinpoint the head of the network for five years and had launched more than 20 crackdowns, but they were not able to destroy the network until they found a customs clearance sheet indicating some of the products might have been made in China.

Dai Li, an inspector with the Shanghai police, said they received a tip from Dubai police and started an investigation. They soon zeroed in on two suspicious companies, one registered in Hong Kong and the other in Guangzhou.

The Guangzhou-based company, Sikelu, was responsible for taking orders from Dubai and subcontracting them to smaller workshops making knockoff products. The trading company in Hong Kong-Xiaoluotuo, which was also run by the owners of Sikelu - was responsible for the distribution of the counterfeit goods.

In a raid on a small counterfeit workshop in Guangzhou, the police arrested more than a dozen craftsmen and seized piles of counterfeit Louis Vuitton bags and raw leather.

"They would first buy an authentic bag and disassemble it, then they would make copies by hand to ensure they resembled the authentic product as much as possible," Dai said, adding that they would sometimes forge certificates and packaging to make them look like part of a limited edition. Later, those knockoffs would be sent to Dubai and sold at a discount of 20 to 30 per cent. 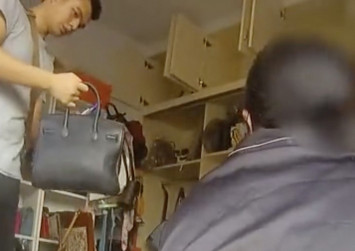 On July 30, around 100 police officers in Guangdong and Shanghai joined forces with Dubai police to conduct a simultaneous crackdown, seizing the suspects and a total of 21,000 knockoff products.

Du Yan, a senior official of the Ministry of Public Security, said this is "a classic case of international co-operation" against intellectual property rights crimes, which have grown more sophisticated in cross-border organisation and division of labour.