Many dogs were left to fend for themselves after scores of Chinese cities were locked down in the fight against the coronavirus.

People living in a southern China community were up in arms last week after their neighbourhood management office offered cash rewards for slaughtering "stray" dogs, according to an online news report.

The gruesome incentive was included in a notice issued to residents of the Wanjiang Community in Dongguan, Guangdong province, in response to complaints about irresponsible dog owners, Kankanews.com reported.

While the document dealt mostly with issues such as the need for owners to have a licence for their pets and to show consideration for other residents by keeping their animals on a lead in public areas and cleaning up after them, it also included a warning.

According to the management office, any dog seen within the grounds of the compound and not on a lead would be classed as a stray. And anyone who killed a stray was entitled to claim a reward of 200 yuan (S$40) - once the death had been verified by a security guard.

Many who saw the notice were horrified, the report said.

"It's such a barbaric rule. It's not what a civilised society should do," a woman was quoted as saying.

"If children see this, they won't believe that they should love animals," another said.

A resident surnamed Zhang said his pet husky had been missing for about a week and he was worried it might have been killed. He said he had reported the matter to the police.

An official surnamed Long from the management office said the notice was not intended as a criticism of dog owners but had been issued in a bid to make them more responsible for their pets.

Read Also
Doggone it: Dead strays found in Malaysia, believed to be poisoned 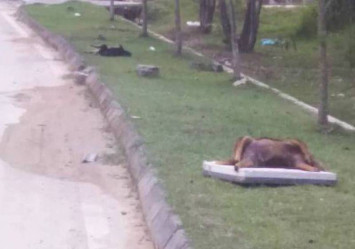 The document had been temporarily withdrawn and would be reworded before being reissued, he said.

But Wanjiang is not the only residential community in Dongguan to offer rewards for killing stray, or unsupervised, dogs. At another, residents were offered 300 yuan for killing dogs weighing 7.5kg (16.5lbs) or more and 200 yuan for smaller ones.

"You can judge how civilised a country is by looking at how it treats its animals," a person wrote on news portal 163.com. "It's so cruel to kill them."

But not everyone agreed.

"Dogs are animals after all, and they might have a virus," a person said. "If it bites your kid and causes his death, will you still protect dogs?"