A handout photo. Tang Yazhu is an example for onlookers for his donation of hair and blood.

A young man in southwest China has refused to cut his hair for three years, and it has nothing to do with style.

Tang Yazhu, 21, who lives in the municipality of Chongqing, had not visited a hairdresser since 2019 before this month after he read an online post about how cancer patients often need donated hair, local media reported.

When it came time to cut the locks earlier this month, Tang told the hairdresser that he planned to donate it to “cancer patients who lost their hair after chemotherapy ”.

The donated hair needed to be over 30cm long and could not be dyed or permed.

Tang, a senior at Chongqing Metropolitan College of Science and Technology, said he chose to grow his hair while at school.

“Since it might be harder for me to get employed wearing long hair after I graduate, the chance for me to donate my hair may only be in my university years. So I decided to start growing out my hair when I read about the donations,” he was quoted as saying by Chongqing’s official news portal cqnews.net.

Besides donating his hair, the young man has also given blood or platelets 18 times during the past three years as part of his charity work.

He started giving blood soon after he reached the required age of 18. He has also volunteered at the city’s blood donation centre. 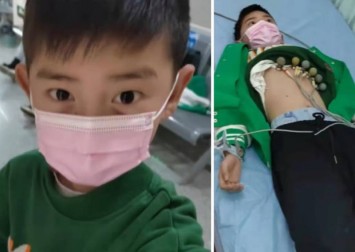 Donors in China can give blood every six months and platelets every two weeks.

Inspired by Tang’s action, some of his friends also started donating blood and taking part in charity projects. However, for Tang himself, he played down the charity work.

“We can find many small ways in life to positively impact society within our capability,” he said.

The young man has won wide applause for his kindness on the Chinese internet.

“This world never lacks warmth because of people like him,” a Weibo user commented.