Life as a coronavirus patient in Wuhan during its darkest hour

Wuhan primary schoolteacher Xiao Ya still occasionally feels short of breath, weeks after her discharge from hospital where she spent a month being treated for Covid-19, the disease caused by the new coronavirus.

Even cooking a simple porridge is difficult, so the 40-year-old teacher has been relying on takeaway meals for survival as she completes her mandatory isolation period.

But Xiao Ya considers herself lucky. Not only did she survive, so did her elderly parents, currently staying in isolation at a hotel after their own hospital treatment. She is looking forward to finally being reunited with them.

The family has been split throughout their weeks of illness, each being treated in a different facility. "I stayed in a Fangcang makeshift hospital, converted from an exhibition centre, and from time to time there came a sudden wailing. I found out later it was someone whose loved one had died," she said.

"We patients talked to each other and I realised I am the lucky one. My parents and I all survived. That is the most important thing." Staying positive through her ordeal took a lot of comforting and sharing for Xiao Ya with her fellow patients and the hospital's medical staff.

Her 70-year-old father had been coughing for 10 days and her 68-year-old mother had barely eaten for a week by the end of January when Xiao Ya lost her appetite and developed a low fever. She checked her parents' temperatures and they both had low fevers too.

CAT scans showed both parents had serious lung infections. Xiao Ya did not take the scan at the time. Her first thought was to get her parents admitted to hospital.

Xiao Ya's parents were too weak to move, so she first travelled to several hospitals to get them a slot for a coronavirus test - making them eligible, through the community neighbourhood committee, to queue for a bed.

Then, she went searching for a hospital which would admit them, sometimes until after midnight. She remembers filling in many application forms, anything for the slightest chance of getting them treatment.

That was back in early February, when Wuhan's 11 million people were under strict lockdown and the city's health care system had crashed - overwhelmed by the number of patients who were queuing in fever clinics overnight for beds without success. The large number of makeshift shelter hospitals were not yet available.

The outbreak, which began in early December, was first traced to the Huanan seafood and wholesale market in Wuhan, provincial capital of Hubei in central China. As infections surged in the following months, two hospitals were constructed in weeks and other 'Fangcang' facilities set up in arenas and exhibition centres.

"I was bitter. It felt so unfair that all my family became infected. We lived a very simple routine, from grocery store to home. We don't eat wild animals and have no idea where this market is," Xiao Ya said. 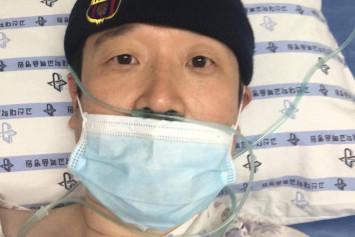 She knew the chances of getting her parents admitted was slim. During her search, one of her teaching colleagues, aged 28, was being treated as an outpatient - with daily hospital visits for IV fluid treatments lasting late into the night, and a fever which would not break - due to the lack of beds.

"A lot of people tried to help us by sharing all sorts of information. State media set up a special channel. I was so weak I could not hold my phone steady. I asked my colleague to help me," Xiao Ya recalled.

After three days in the queue for beds, her parents were admitted to different hospitals and Xiao Ya finally had her lungs checked. By now, the newly converted Fangcang hospitals were getting up and running, and she was sent to one of them.

"The first three days were total chaos. The medical staff, all from Shandong province, were not sure what to do. Patients rushed to get their meal boxes and they were [contaminated with] food residue. There were no cleaning staff and doctors and nurses had to do all the cleaning," Xiao Ya said.

As more support staff arrived and order was established in the hospital, Xiao Ya - who suffers serious anxiety - learned to relax with the help of counselling from the medical team.

"They tried to teach us to be positive and light up the mood. They led us through light exercises and dance. They even folded paper cranes and wrote cheering words on the wall to encourage us," she said.

Her parents, alone in their separate wards, never stopped worrying. Xiao Ya called them every day to encourage them.

Looking back, Xiao Ya said many had helped her family, but the biggest help in finding a hospital bed had come from the government. She was most grateful, she said, to the medical staff who had travelled from Shandong province, eastern China, to help them.

"The doctors and nurses were there all the time. Whenever I woke up I saw them, checking patients. When I went to the toilet in the middle of the night I saw them, still sitting up and monitoring patients. I felt so safe around them," Xiao Ya said.

To preserve their protective suits, the staff did not eat, drink or take toilet breaks during their six hour shifts. Their goggles were fogged and clothes wet with sweat, which Xiao Ya found particularly touching.

"Once, I was walking with a nurse and she told me to slow down because she was short of breath and could not walk steadily under her heavy suit. I felt so sorry," Xiao Ya said. 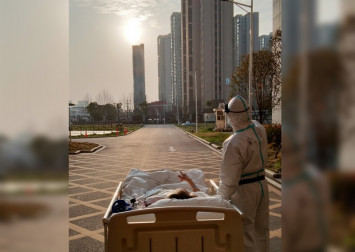 Every doctor and nurse she encountered was added to her WeChat - China's social messaging app - while her mother took pictures of all the medical staff who helped her, posting them in the family's WeChat group.

"My mother said she wanted to remember all of them, even though she could not recognise them with their protective gear on. Every day she posted messages, like 'this nurse whose name is such and such gave me a shot.'"

When Xiao Ya and her fellow patients were moved to the Huoshenshan hospital, they bowed repeatedly to the staff who walked with them from the red zone to the entrance, crying all the way.

She was finally discharged on March 10, followed by her father three days later. Xiao Ya returned home for another 14 days of isolation, after first spending 14 days at a hotel, like her parents. Her mother was discharged on March 21 and is currently in another hotel. None of them have had to pay for anything.

From the isolation of his hotel balcony, Xiao Ya's father can see the family home. Next week, he will be there, reunited with his wife and daughter.

"My father told me all he wanted to do was to brew a pot of lotus root soup, which is a Wuhan speciality dish, for the family to have together. He said that every day," Xiao Ya said.