China's telecoms giant Huawei Technologies Co. has trademarked the name of its founder Ren Zhengfei's youngest daughter Annabel Yao to prevent companies from "maliciously" using her name as she sets off on an entertainment career.

Search results on Tianyancha, a Chinese business registration and trademark platform, showed authorities approved the trademarks on Oct 21. They covered the woman's real name, Yao Siwei, and her stage name Yao Anna in over 20 classes of goods and services, such as jewellery and machinery.

News of the trademark applications became public in February, just days after the company filed for the applications on Jan 25. The decision was blasted by people who thought the case was an example of the perks enjoyed by the rich and powerful.

Amid the public criticism, Ren apologised in internal letters that were leaked for leveraging Huawei's stature in China for personal reasons and said it was the first time he had done so.

Yao was born to Ren's ex-wife Yao Ling and is nicknamed Huawei's "little princess". In January, she announced the start of an entertainment business in a splashy 17-minute documentary.

Calling herself a "princess who breaks the rules", Yao signed with Beijing-based TH Entertainment as an entertainment artist in January and released her first pop single soon after that.

A ballet dancer who passed Britain's prestigious Royal Academy of Dance's top-level ballet exam at the age of 15, the Harvard graduate has received mixed views for her endeavour into show business. 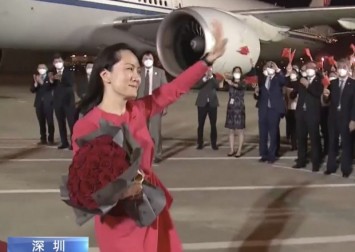 Ren reportedly told Huawei staff in the February letters that the trademarks were meant to protect her name as early as possible because some companies in China had already trademarked her name for their "malicious" use.

Huawei applied for the trademarks because Yao, who is 23-years-old and recently graduated from Harvard University, does not own a company to use in the application process.

However, the move has drawn some backlash online.

"She can apply through other companies, why Huawei? It is upsetting to take advantage of Huawei's influence. I feel it is selfish and I suddenly do not like Huawei anymore," one user said.

Furthermore, Yao finds herself compared to her older half-sister, Meng Wanzhou, who spent nearly three years under house arrest in Canada fighting extradition to the US.

She was welcomed home as a hero after she was released in September, and her saga became a nationalistic rallying point in China amid tensions between officials in Beijing and their counterparts in Ottawa and Washington over the detention of Canadians Michael Kovrig and Michael Spavor.

"We like Meng Wanzhou. She is a hero in our hearts," a person wrote on Weibo, while saying about Yao: "It is a pity such a well-educated person becomes an entertainer."

There is also a perception that Ren has a soft spot for Yao, especially after he flew to Paris ahead of her debutante ball in 2018 and agreed to pose for a photoshoot with Yao for Paris Match, a magazine, despite being famously shy.

In April 2020, Ren told the South China Morning Post that he had come to regret the lack of time he spent with his older children, Meng and Ren Ping, who are over 20 years older than Yao.