In a handout photo, millions of viewers tuned in to a live stream of construction of Leishenshan, one of two temporary hospitals being built in Wuhan.

It has low production values and no celebrities but millions of people in China are tuning in to watch a gripping kind of reality programme - the live feeds of construction of two temporary hospitals to treat patients at the heart of the deadly coronavirus outbreak.

The two hospitals - Huoshenshan and Leishenshan - are expected to be completed next week, adding 2,300 beds to help ease an acute shortage in the central Chinese city of Wuhan.

At least 106 people have died and more than 4,500 others have contracted the virus in mainland China since the outbreak began in the Hubei provincial capital more than a month ago.

State broadcaster CCTV is hosting the streams from the construction sites, which together had an average of around 18 million concurrent views on Tuesday.

Compare that with the 27.3 million concurrent viewers Tencent Video attracted for its live broadcast of the National Day military parade - an extravaganza planned and orchestrated by the People's Liberation Army.

The temporary hospitals are part of the authorities' efforts to contain the illness, measures that include imposing a lockdown on more than a dozen Hubei cities - including Wuhan.

Internet users used the feeds to offer both praise and criticism of the projects, with most comments encouraging.

"We are with you, Wuhan! Hang in there, things will be better!" one viewer from Guizhou in southern China wrote.

Other cities - including Zhengzhou in central Henan province and Dongguan in southern Guangdong province - are also rushing to build temporary hospitals.

Professor Xu Xiaoyuan, an infectious disease expert at Peking University in Beijing who was in charge of treating severe cases of Sars, or severe acute respiratory syndrome, at one designated hospital in 2003, said the two Wuhan facilities would play a critical role in curbing the epidemic across the country. 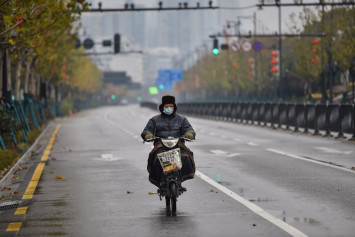 When military doctors were sent to the newly built Xiaotangshan Hospital to treat Sars patients 17 years ago, Xu and other civilian doctors were spared and redirected to the Beijing Chest Hospital where confirmed cases of Sars were sent for treatment.

"From the Sars experience, such hospitals could effectively treat patients and greatly help reduce the fatality rate. Such specialised hospitals are very important in treating severe cases," Xu said.

More importantly, with the help of fast diagnosis kits, confirmed cases could be isolated and sent to the specialist hospitals quickly, and that would also help disrupt transmission, he said.

"The two important things for handling infectious diseases - treatment for severe cases and disrupting transmission - can both be achieved in such centralised and specialised hospital," Xu said.

David Heymann, professor of epidemiology at the London School of Hygiene and Tropical Medicine, said the hospitals would certainly be an important tool for controlling the outbreak if they were being completed as rapidly as reported.

Hospital isolation of those with the infection would help reduce their potential to spread the virus to others, he said.

"With a reproductive rate estimated as high as 2.6 in some studies, this means that every person infected could infect between two and three others - this is why Wuhan needs to be prepared, though the reproductive rate at present is only an estimate and will likely vary over time," Heymann said.

Lawrence Gostin, professor of public health law at Georgetown University, said that while the makeshift hospitals would be a "useful measure", he preferred to see "additional strategies been pursued by the government like building and operating mobile clinics in the community, examining and checking with people at their homes and neighbourhoods".

"Widespread testing and rigorous contact investigations are the most crucial response. Hospitals alone can't begin to do that," Gostin said.