Jiang Wenqiang, who became nationally-known as Dalian xiaohuo, or "young guy from Dalian", based on his experiences in Wuhan, Hubei province, during the coronavirus lockdown, is now volunteering to fight for his hometown－Dalian, Liaoning province.

Jiang said he was shocked when he heard the news of the local infections, but he decided to do something for his hometown using the skills he gained in Wuhan five months ago.

The 28-year-old closed his barbecue restaurant and started working at a quarantine hotel on Tuesday for 40 people who'd had close contacts with the confirmed patients.

"The work is the same as what I did in Wuhan, delivering three meals to the close contacts, removing their trash and doing some cleaning," he said.

"But compared to the stressful work I did in coronavirus isolation at a Wuhan hospital during the outbreak, I can handle the work in the hotel better now."

Jiang accidentally disembarked at the train station in Wuhan on Feb 13 and could not continue his journey south to Changsha, Hunan province.

With nowhere to go, he signed up to be a volunteer cleaner at hospitals because the advertisement said "free food and accommodations provided" and then worked in Wuhan No 1 Hospital for a month.

Media reported his story and his fame spread. Many people were inspired by his spirit of seeking joy amid hardship. 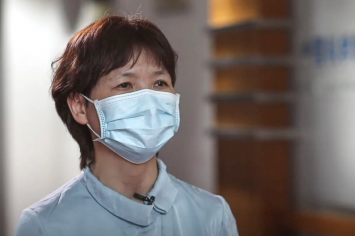 "But I want to salute the medical workers who are collecting samples for nucleic acid tests," Jiang said. "I can imagine how hard it is to work under the burning sun, wearing such heavy protective clothes."

Dalian announced on Sunday that it would arrange free nucleic acid tests for all residents to contain the spread of the coronavirus. The city has dispatched 8,107 medical workers to collect samples.

"Together with the medical workers, I will hold on until we win the battle against the virus," Jiang vowed.

The tag "'Dalian xiaohuo' is fighting for his hometown" became a hot topic again on Sina Weibo on Tuesday. Someone initiated a poll "Do you think his experience can be made into a movie?" and got more than 75,000 "yes" votes within seven hours.

"It might be a good idea, but now I only hope that my hometown, the beautiful coastal city of Dalian, recovers as soon as possible," Jiang said.