Love, courage in China: Grandma puts toddlers on leash while she cooks, drawing spiders on clothes to stop period-shaming, dead ducks for sale

Two toddlers are tied to their grandma who was cooking (left) and art to protest period-shaming (right).

A grandmother went viral in China after she put two toddlers on a leash which she tied around her own waist to prevent them from getting into trouble while she cooked.

The mother of the twin boys, surnamed Su, said she felt guilty for leaving her sons with the older woman because it is harder for her to chase around two toddlers by herself.

Su, who lives in Shijiazhuang in central China's Hebei province, said the boys are nearly two years old, and were tied to the rope so they did not walk far away from their grandmother while she was cooking.

"It's hard for my mother to babysit two kids and cook at the same time. So, she invented this way to prevent them from falling down," she was quoted as saying.

"I felt a bit guilty because my mother raised me and now she still has to help me raise my kids," she said.

A 15-year-old Chinese boy drew red spiders on a pair of school uniform trousers to bring public attention to the problem of mocking girls whose uniforms get stained from their menstruation.

The teenager, surnamed Fang, from a middle school in the southwestern municipality of Chongqing, said he once encountered a girl at school whose clothes were stained from her period and was ridiculed. He said other students had mocked her with malicious comments, according to Bailu Video.

Fang said he is introverted so he felt uncomfortable making big speeches but wanted to use another way to comfort the girl.

"I drew two spiders on the back of my school trousers. We know that spiders will get angry if other creatures do not respect them or invade their territory," he said.

"The same logic applies to humans," he was quoted as saying. "So we should respect other people's privacy. We should stop disrespecting other people."

"What a warm boy he is! He has spoken up for the girls," wrote one user at Douyin.

Another person said: "A boy once mocked me for the blood on my trousers. Here is how I responded; 'You can marry a woman in the future who does not have periods, or you ask your Mum how you came into being.' The boy didn't know how to reply."

Pitching in to help a farmer

Residents in southern China made an effort to support a farmer in his 80s by buying dead ducks from him after the birds had died in China's heatwave before he could sell them in a wet market.

Read Also
Love and courage in China: Cycling 2,500km for son, punching window to save grandson, village has a wedding 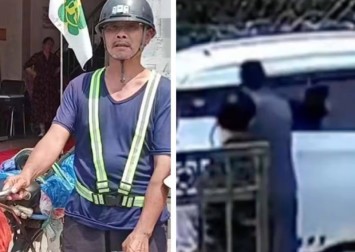 According to the video news portal Jiupai News, the farmer from Hunan province looked frustrated as he removed the bodies of the birds at the market where he hoped to sell them.

Many people gathered around him and later offered to buy the ducks at 70 yuan (S$14) each, about half the price a live duck is typically sold for, said a witness, surnamed Zhang.

"In this scenario, both sides wouldn't lose much," he was quoted as saying. "After all, dead ducks are worthless. Now customers bought some, so it can reduce the loss for the old man."

"Thumbs-up to these good people," commented a user at Douyin.

Another person said: "I believe that a majority of the people in this world are kind."