Loved ones and Hong Kong officials bid farewell to Kenneth To, the city's record-breaking swimmer and adored 'role model'

Family and friends of Kenneth To King-him, the local swimming star who died last month, gathered in Hong Kong on Saturday to remember an athlete they said left love and warmth in their lives.

An array of white wreaths were laid in the lecture theatre of the Hong Kong Sports Institute in Sha Tin, many bearing farewell messages to the record-setting swimmer who died suddenly in the United States after a practice session on March 18.

In the memorial service, attended by about 200 guests including athletes and government officials, Sunny To On-lai recalled that his 26-year-old son had been active and adventurous since he was a toddler.

"His fearless character for adventure and his willingness keep going forward were already apparent at that time."

To's father said his son had always been friendly and generous with others. As a child, each time To visited the doctor he would ask for one more piece of candy to share with his sister.

When a swimwear company started sponsoring him, To always gave out goggles and swimming suits to other athletes as encouragement, the father said.

He added that his son even offered to let his parents, who live in Australia, track him via GPS after he moved back to Hong Kong to relieve their worries and make them all feel closer.

Read Also
'It hurts so much to admit he's gone': Kenneth To's girlfriend on his shock death 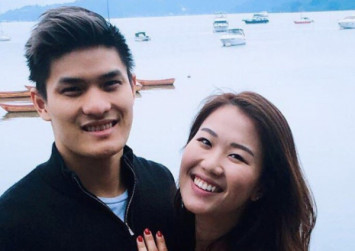 "To our family, this sudden and unfortunate incident is the most painful moment of our lives. But we believe [he is] resting in peace in the embrace of God," his mother Siu Mei-ling said.

"Ending his life at the most glorious and most loved moment, to him, it may be a perfect ending."

In 2016, To switched his nationality from Australia, where he was raised from the age of two and learned the sport, to Hong Kong, the land of his birth.

During his first 10 months swimming for Hong Kong, To set four long-course and nine short-course records, and held 17 records when he died.

He first represented Hong Kong at the 2017 World University Games, followed by the China National Games in Tianjin, where he captured a silver medal with Chinese star Sun Yang in a relay team.

It was Hong Kong's first swimming medal at the China National Games since it made its debut in 1997 after the handover.

Last month, To was attending a three-month training programme with the Gator Swim Club of the University of Florida. To felt unwell after a practice session and was taken to hospital where he passed away. The cause of death has not been established.

Lau recalled that To's Cantonese had improved throughout his time in Hong Kong, which showed his efforts to be at home in the city.

"When we talked, he gave me the feeling that he was a humble gentleman. His swimming skill was good and his character was also good. He was a rare player," he said.

Wong said To's death was a shame because the swimmer could have definitely qualified for the Olympic Games and competed in the final round.

"He lives as a role model for our future swimmers to learn from," he said.

Rosanna Sze Hang-yu, a local swimming star, praised To as a kind and positive friend. She said swimmers in Hong Kong knew his name before he arrived, but were soon impressed with his modesty.

"From the beginning, he insisted on speaking with us in Cantonese. This showed he had strong determination to move back to Hong Kong," she said.

"The history he made in the city's swimming circle, and his passion for swimming - there is no doubt he is a role model for local swimmers."