Insiders call for changes to improve the sector and help preschool establishments attract and retain qualified professionals, as Lin Shujuan reports from Shanghai.

Preschool education in China has never been so subject to public scrutiny as during the past month following a slew of allegations of mistreatment in early childcare facilities in a number of cities, including Beijing and Shanghai.

The latest allegations concern a kindergarten in Beijing operated by RYB Education, a listed company in New York. Parents circulated photos showing what they claimed were needle marks on their children's skin.

The claims followed an incident at a prekindergarten in Shanghai, where parents distributed video footage they said showed teachers beating toddlers and force-feeding them wasabi. 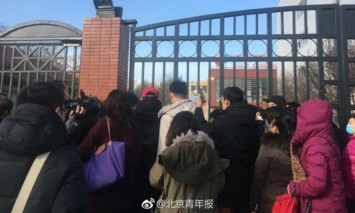 The alleged incidents have sparked an unprecedented public outcry nationwide, with parents asking that if such things can occur at high-end facilities in the country's most developed and international cities, what might be happening in second-and third-tier cities or the most isolated areas?

Many say the mistreatment of children by professionals is not restricted to isolated cases, but is a systemic problem that arose during the rapid expansion of the childcare and education sectors, and there is no quick fix.

For most of its history, China was a largely agrarian society where there was little need for formal early childhood education as children were usually cared for within the extended family.

Kindergartens - in China, that means facilities for children ages 3 to 6 - only began emerging toward the end of the last century, mainly catering to affluent urban families.

The situation started changing in the 1980s when the economy started to take off and society became increasingly mobile. Millions of migrant workers moved to the cities, leaving children in the care of older relatives. Demand for kindergartens grew rapidly in urban areas as the extended family dwindled and no one was available to care for the children while their parents worked.

Meanwhile, as primary and secondary school education became increasingly competitive, many parents succumbed to the pressure and sought schooling options earlier and earlier. "Do not let the child lose at the starting line!" is one of the most popular slogans in contemporary China.

As a result, the early education industry has exploded. Last year, there were 44 million registered kindergartners, up from 34.5 million in 2011, and while the government has supported that growth, both financially and with favourable policies, demand far outstrips supply.

In 2013, the Ministry of Education set the full-time kindergarten staff-to-student ratio at 1-to-5, but it is now closer to 1-to-20. The gap is likely to grow after the government introduced the second-child policy last year.

By 2021, China will have an extra 15 million preschoolers, while the shortfall of preschool teachers and childcare workers will surpass 3 million, according to a 2016 study conducted by the Chinese Fund for the Humanities and Social Sciences. The latest available statistics show that nearly 210,000 students majored in preschool education in 2009, and although the number is expected to have risen in recent years, it will still take years to close the gap.

The pinch is mostly felt by private kindergartens, which account for at least 50 per cent of the total yet lag far behind public facilities in terms of financial support and other resources.

As a result, in the absence of qualified instructors these kindergartens often hire unqualified staff members; the ministry's statistics show that 22.4 per cent of preschool teachers in China have only been educated to high school standard at most.

A report on china.org quoted a kindergarten principal from Jinan, Shandong province, as saying that once these unqualified teachers "find that the children are not as cute and naive as they had imagined, lacking better training they will simply treat them improperly".

Moreover, parents, who in extreme cases have to struggle in a competitive environment to secure a kindergarten spot for their child, have to take whatever is offered.

Insiders believe that fixing the situation will require a clear understanding of the causes of the shortage of qualified professionals, which include a lack of respect for the profession, poor salaries and the resultant low popularity of training courses.

As a relatively new profession, early childhood educators have lower social status to their primary and secondary school counterparts. Many people, especially the older generation, consider them to be little more than nannies, whose duties can easily be replicated.

"Few people understand that preschool education is more than physical care; it is also emotionally and intellectually demanding," said Liu Qing, a 23-year-old journalist. In 2015, as an intern at a local paper, Liu spent a month working undercover in four Beijing kindergartens to collect first-hand information about early childhood education.

In her account of the experience, she described how she easily passed all the interviews when posing as a high school graduate, and detailed the physical exhaustion and emotional frustration that resulted from working almost 14 hours a day. At one point, when challenged by a group of unruly children, Liu, who had long considered herself a child lover, found herself roughly pushing a child aside.

"I survived the experience only by telling myself time and time again that 'This is not my real job and I'll leave it soon,'" she wrote.

It costs nearly 5,000 yuan ($755) a month to enroll a child at the RYB kindergarten in Beijing at the centre of the most recent allegations, but most of its teachers are paid an average of 3,650 yuan a month. By comparison, a live-in nanny earns about 5,000 yuan a month in China's major cities.

The failure to recognise preschool teaching as a profession has resulted in difficulties attracting and retaining talented people.

Hu Ke, 25, opted to study preschool education at a key university, but most of her classmates were transferred to the course because they failed to meet the academic requirements of their desired majors.

As one of the few who chose to work as an early childhood educator upon graduation, Hu remembers the shock in her classmates' eyes when she announced her decision.

Having spent five years employed at a public kindergarten, working 12-hour shifts and earning 5,000 yuan a month, she plans to quit next year.

"I love children - so what?" she said. "I simply can't carry on anymore. I really hope society can learn to value the profession a little more."

In a column published on Tencent Dajia, a popular online social topics forum, education expert Yin Jianli wrote: "Teachers are among the most vital and valuable resources a kindergarten can offer; without them other resources are meaningless."

Xiong Bingqi, deputy director of the 21st Century Education Research Institute in Beijing, shares that opinion. However, he noted that while the government and society have rushed to build more kindergartens to accommodate the growing younger population, the question of how to attract and retain qualified professionals to ensure top-quality care has only recently risen to the top of the agenda.

Teachers' salaries account for only a small percentage of early childhood education expenditures, especially in private kindergartens, and while many people blame the profit motive, some insiders see it as a systemic problem.

Despite rising investment by the government and parents, early childhood educational institutions remain underfunded compared with primary and lower secondary education, according to a paper recently published in the International Journal of Educational Development.

The authors found that public financial support constituted less than 30 per cent of the total investment in early childhood education, with most institutions relying on off-budget revenue sources, such as fees and levies.

Tight budgets have been further diluted by the rise in costs associated with other expenditure, especially rents, which can be astronomical in some cities. By the time the money trickles down to the teachers there isn't much left.

"If the teachers are not treated fairly and with dignity, how can you expect them to do the same to the children?" Xiong said.

Jing Yishan, a well-known social commentator, said these factors and the lax supervision of kindergartens explain why the installation of surveillance cameras in the kindergartens at the centre of the claims in Beijing and Shanghai didn't prevent the teachers from allegedly hurting toddlers.

The installation of closed-circuit cameras is meaningless unless there are watchful eyes behind them, he said.

According to Jing, while both education authorities and parents can serve as those eyes, in practice, the parents' rights can't be guaranteed because preschool education remains a seller's market.

In the recent cases, the local governments responded promptly, firing and even detaining teachers and administrators.

The installation of surveillance cameras at kindergartens is now compulsory, and permanent inspectors have been hired to oversee kindergartens in the two cities. The State Council, China's Cabinet, has also dispatched inspectors nationwide to check teachers' ethics and working methods.

Experts believe greater recognition of the contributions and value of early childhood educators, specifically through a pay rise, would be the first step to addressing the underlying problems.

Xiong urged better funding of early childhood education, along with a revised mechanism to attract more investment and ensure better treatment of the teachers.

Bi Yinghu, an early childhood education expert at the University of Macao, suggested the government should establish a special fund and also set a minimum salary requirement to ensure teachers are paid fairly.

Xiong is in favour of higher wages for preschool teachers, but stresses that long-term solutions must be found to eradicate the problem for good.

"This (a pay rise) would just serve as a start," he said.