A new advert from the Chinese e-commerce website Tmall that includes a same-sex couple has won widespread praise and been hailed as a small but significant win for China's LGBT community.

The 20-second clip released this week, promoting the site's annual pre-Lunar New Year shopping event that ends on Friday, features a gay man introducing his partner to his family.

The clip had racked up thousands of views and hundreds of supportive comments on Weibo, China's equivalent of Twitter, suggesting that Chinese audiences are increasingly accepting of the LGBT community.

Chinese LGBT advocates have welcomed the advert as a positive step for the community, but warned that it may take a while before LGBT representation becomes truly accepted.

"This is only a single case and not widespread, so it's hard to say that it represents progress," said Yang Yi, media officer at the China Rainbow Media Awards, a non-profit dedicated to promoting LGBT visibility in the media.

"In recent years, it has become increasingly difficult to see LGBTQ+ representation in the Chinese media, regardless of whether that's film or the news media, so every instance is very important."

Mainstream representation of LGBT people in Chinese media is rare, and LGBT content and discussions are regularly censored online because the government deems them sensitive.

In the past, entire social media discussion forums, and scenes from films with explicit LGBT themes, have been pulled at the government's request, while LGBT advocacy NGOs have been forced out of existence.

Homosexuality in China was decriminalised in 1997, but LGBT people still struggle to assert their rights.

Many LGBT Chinese face discrimination and prejudice in their everyday lives, in the absence of anti-discrimination legislation for sexual minorities, while forced LGBT conversion therapy continues to be practised.

However, in the past year there have been some minor advances in legal rights for LGBT people.

A gay couple in Beijing were the first LGBT couple to become each other's legal guardians in August, and hundreds of thousands of LGBT supporters appealed to the government to authorise same-sex marriage during its recent public consultation on civil legislation. 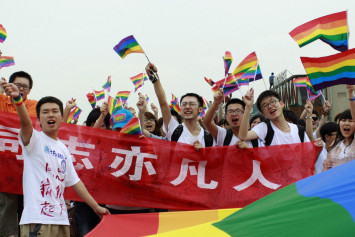 "LGBT people are the top consumers in various sectors, and will opt to buy products from companies that show a positive attitude towards their community, which then makes the company more competitive," Peng said.

"I believe this shows the slight influence of the 'pink economy', and that all kinds of companies should be paying lots of attention to the advert."

A 2017 report by strategic market research provider Euromonitor found that China had an estimated 70 million LGBT people and the pink economy was worth US$300 billion (S$404 billion) a year.

The timing of the advert to coincide with the forthcoming Lunar New Year festival was doubly significant, according to Yang, even though the advert did not explicitly mention LGBT rights or show the characters displaying romantic feelings towards each other.

"Chinese New Year is the most important festival of the year for most Chinese people," Yang said. "It is a time of family reunions in which tradition and mainstream culture are intertwined. So adding LGBT content to the mainstream narrative is an attempt to affirm it."

However, a spokesman for the Beijing LGBT Centre, surnamed Duan, said that it was a "one-time online marketing ploy", even if it made LGBT people in China more visible. "I feel more ambivalent about it," he said.

This was not the first time a mainstream advert for a Chinese company had featured LGBT themes, according to Yang.

In 2014, the e-commerce site Dangdang released a poster before the November 11 Singles' Day shopping festival, showing two men walking hand in hand, with the caption: "I'm scared of dirty looks but I dare to love truthfully."

A spokesperson for Alibaba, which owns Tmall and the South China Morning Post, said: "Chinese New Year is a time for family reunion and inclusion, and the ad is a creative expression to celebrate such an occasion."