A couple in central China had five children within eight years and the father sold them successively for a total of 180,000 yuan ($38,600), a local court has revealed.

The father, surnamed Yang, was sentenced to 10 years in jail for selling his two sons and three daughters born between 2012 and last year to human traffickers, according to an article on the website of Yuxian county court in Hebei province published late last month and which went viral on Wednesday (Dec 15).

The man “made childbirth as a way to make profits” and sold the babies after they were born to whoever wanted them, regardless of their motive for buying the children, the court said.

Despite government efforts to stamp out the practice, child trafficking remains an issue in China, including parents selling their own children, but Yang’s case has shocked the public. It’s unclear if his wife was coerced into agreeing to the trafficking, but she was not charged with any crimes, according to the court documents.

One of the children was sold to a patient who shared a ward with Yang’s wife while she was still in hospital after giving birth, whereas the rest were all sold via a middleman, surnamed Li, to people whose purposes were unknown, the court heard.

The children were each sold for a price ranging from 20,000 yuan to 80,000 yuan each, it heard. Li, who was paid 3,600 yuan in total for the transactions, was sentenced to seven years in jail, and his daughter-in-law, who posed as the mother of two of the children to meet buyers, received a jail term of 21 months. 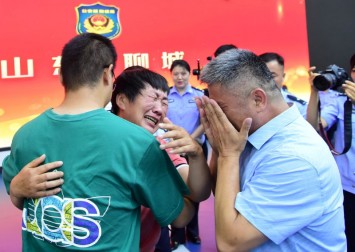 “The sale of children by their guardians not only infringes the rights of minors, but also supports the existence and expansion of the illegal trade,” the court warned.

While the abduction and trafficking of children was rampant in China during the 1980s and 1990s after the country adopted the one-child policy, the number of cases has declined in the past decades amid an intensified crackdown by authorities.

Nearly 6,000 cases of child abduction were filed with police across the country in 2012, and this number dropped to 666 last year, the Ministry of Public Security said in a press conference in September.

In a case disclosed by the Supreme People’s Procuratorate last year, a two-year-old girl was sold by her father, who also has a son, in Fujian province, southeast China, for 80,000 yuan to a childless couple in 2019. The father was sentenced to five years in prison and lost custody of the child, who was sent to a local children’s home.